The onset of the rebellion against Bashar Assad in January 2011 interrupted intense negotiations between the Syrian president and Prime Minister Benjamin Netanyahu, during which the latter agreed to a full Israeli withdrawal from the Golan Heights in exchange for a peace agreement, Yedioth Ahronoth reported Friday.

In the spring of 2010, Netanyahu and Defense Minister Ehud Barak launched secret indirect negotiations with Assad through American mediator Frederick Hoff, a former commander in the Marines and an expert on border demarcation in disputed areas.

Earlier this week Hoff resigned from his post as special US envoy to the Middle East. According to the Yedioth Ahronoth report, documents written by Hoff suggest that the negotiations were based on Netanyahu's willingness to return to the June 4, 1967 lines, giving Damascus full control of the entire Golan Heights area. Israel captured the territory in the 1967 Mideast war.

American businessman and Netanyahu associate Ronald Lauder reportedly negotiated a similar deal in 1998, during Netanyahu's first term as premier. At the time, Netanyahu denied that claim. 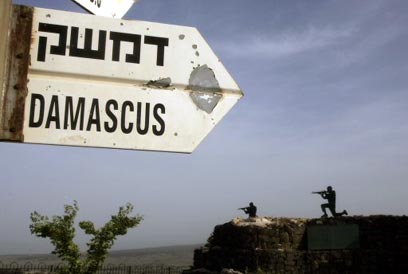 According to American sources, Netanyahu and Barak agreed to withdraw to the 1967 lines in exchange for a comprehensive peace deal that would include an Israeli "expectation" for the severing of ties between Syria and Iran. However, the sources said, the burgeoning deal did not include an explicit commitment by Assad to severe ties with the Islamic Republic.

The report said the sides did not agree on a timeline for the Israeli withdrawal: Syria wanted the agreement to be implemented within one and a half to two years, while Israel asked for more time before pulling out of the region.

Yedioth quoted a senior American official as saying that the negotiations were serious and far-reaching and would have likely ended with an agreement had they not been interrupted by the uprising against Assad. The official estimated that Netanyahu resumed the talks with Assad to justify the stalemate in the negotiations with the Palestinians and because he viewed Syria as the weak link in the so called "axis of evil," which also includes Iran, Lebanon and Hezbollah.

According to the documents written by Hoff, the discussions were held at the prime minister's official residence in Jerusalem. Netanyahu and Barak kept the talks a secret, but in early 2011 a Kuwaiti newspaper reported that special US envoy Dennis Ross met Syrian Foreign Minister Walid Moallem and said that Damascus was willing to resume talks with Israel and that the Jewish state was willing to return the Golan Heights. The Prime Minister's Office denied the report.

Yedioth said US President Barack Obama and Vice President Joe Biden were aware of the negotiations, as were Secretary of State Hillary Clinton, National Security Adviser Tom Donilon, Ambassador to Israel Dan Shapiro and Dennis Ross. Syria's representative to the talks was FM Moallem, but Hoff also met with Assad, the report said.

Netanyahu's office said Thursday that "this initiative was one of many proposed to Israel over the past few years. At no point did Israel accept this American initiative. The initiative is irrelevant, and its publication at this time stems from political considerations."