Ariel Zilber – a talented rock star turned settler ideologue – was expected to win a lifetime achievement award but a public outcry prompted prize committee to downsize award. Now, FM Lieberman is fuming at what he dubs 'appeasement of radical-left's Bolshevism'

A life-time achievement award for a controversial singer-turned-settler has put Israel's music industry in a bind.

ACUM has decided to change the wording of the prize set to be given to singer Ariel Zilber because of pressure exerted on the body's board of directors – namely from Dalia Rabin – daughter of slain prime minister Yitzhak Rabin. 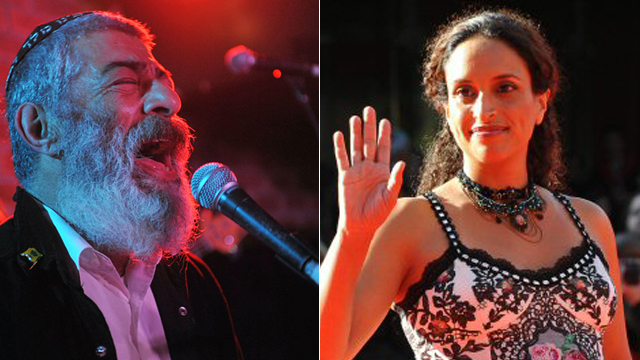 Zilber had in the past supported the early parole of Rabin's assassin Yigal Amir.

Zilber, who rose to fame as a talented singer, songwriter and performer of lighthearted and happy-go-lucky soft-rock ballads grew increasingly religious and rightwing over the years.

Over the last decade he has completely thrown his support behind the radical right-wing fringe of Israeli settlers; most recently joining Eretz Israel Shelanu (Our Land of Israel), an extreme right-wing party led by Baruch Marzel and Rabbi Shalom Dov Wolpo.

He has also made a number of homophobic comments and appeared in a video advocating an early release for slain Prime Minister Yitzhak Rabin's assassin.

Dovish Israeli singer Achinoam Nini refused to accept an award by ACUM (a non-profit corporation administering the rights of authors, composers, lyricists, poets, arrangers and music publishers) due to the organization's decision to honor Zilber with an award as well. A public outcry ensued.

Ynet has learned that the prize ceremony, which will be held Monday evening at Jaffa's Noga Theatre, will ditch the words 'lifetime achievement' from Zilber's honor, focusing instead on his contribution to Israeli music.

Foreign Minister Avigdor Lieberman slammed the ACUM's decision, saying that "ACUM's retreat from its original decision and move to give (Zilber) a prize for his contribution to music and not a lifetime achievement is a sad and appeasement of the radical-left's Bolshevism.

"The very same people waging a war for some teachers right to express moral doubts about the IDF in the name of freedom of speech, are now fighting to silence an artist whose genius contribution to Israeli culture over the years is undisputed. I hope that by this evening, ACUM will return to their original and correct decision," the foreign minister wrote on his Facebook page.

Economy Minister Naftali Bennett also commented on the issue saying: "I suggest ACUM backtrack their decision. The shame is theirs, it is an honor not to receive an honor from you."

After learning Zilber would receive the prize, Nini wrote on her personal Facebook page: "I wanted to announce that I have cancelled my participation in the ACUM Prize Award Ceremony due to ideological reasons. I also asked that no one accept the award on my behalf."