The rabbis will decide which Israelis get to be Spanish, says Amar

Former Sephardic chief rabbi sheds light on the process that led to Spanish decision to grant nationality to descendents of Jews expelled in 1492, says rabbis will determine who should be recognized as offspring

Former Sephardic Chief Rabbi Shlomo Amar sees the Spanish Parliament's decision to grant nationality to the descendents of Jews expelled from the country 522 years ago as "a small correction of a great injustice."

Speaking to Ynet, Rabbi Amar reveals that he was involved in the talks between the Jewish communities and the Spanish authorities, which eventually led to the legislation. The highlight of the talks was a meeting he had with King Juan Carlos I of Spain about six months ago.

According to the rabbi, it all began upon Hugo Chavez's rise to power, when Jewish representatives in Venezuela met several times with Spain's ambassador to Caracas, seeking shelter in his country and voicing concerns that Chavez could harass them.

"That ambassador, who really understood us, raised the idea to grant passports to Spanish Jews from the entire Diaspora – Morocco, Tunisia, Turkey, South America, and basically almost the whole world," he says.

"At first there was correspondence with me," he says. "They wanted to decide who would be recognized by the community as an offspring of the expelled, and I suggested that rabbis would be able to rule on it too, because they engage in clarification of Jewishness and can testify on the origin of every person in a professional and reliable manner. With God's help, they agreed."

'Jews will have a place to go to if needed'

Several months ago, shortly before the end of his term as chief rabbi, Amar traveled to Spain for a "long and special" meeting with the king.

"They said that we had to meet with him, because such a law, which has to do with citizenship, would surely not be able to pass without his support. And I added that King Juan Carlos and Queen Sofia would be able to rectify the distortion created by the ancestors, King Ferdinand and his wife Isabella." 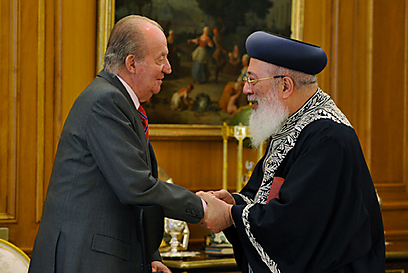 Spanish king with Sephardic rabbi. 'He asked a lot of questions about the Sephardic Jewry and was very interested' (Photo: Sami Cohen)

The king "asked me a lot of questions about Sephardic Jewry, and was very interested," the rabbi recalls. "We later met with the interior minister and justice minister about the law itself."

According to Amar, there was no Israeli involvement in advancing the legislation. The only involvement was his, as a religious leader.

"The ones who worked on it were Yitzhak Kirov, head of the Jewish Federation, and Shmuel Cohen, who is responsible for religious affairs in the federation. I was asked to get involved because of my position, which allowed them to reach the king and ministers."

Now, seven months after that decisive meeting, Rabbi Amar says the mission has been accomplished.

"It took several years, because after all, we are talking about a prestigious European citizenship, but no one thinks Jews from America, France or Montreal will use it to settle in Spain and 'conquer' it. If, God forbid, there is a serious anti-Semitic awakening in one of the unstable places – they would have a place to go to.

"We have constantly stressed that this is a small-scale correction of the great injustice committed during the Inquisition and throughout the ages."