The head of Gaza's secretive jihadi groups says local Salafis informed Hamas leadership they are prepared to fight Israel at any time.

A leader of one of Gaza's secretive jihadi groups says the al-Qaeda-inspired movement now has several thousand armed fighters in the seaside strip, posing a formidable threat to both Israel and the area's Hamas rulers.

In an interview with The Associated Press, Abu Bakir al-Ansari described a movement that is larger and better organized than is generally believed, with dozens of fighters now in Syria, and claimed his group killed an Italian activist three years ago. He said Gaza's Salafis have agreed with Hamas to observe a truce with Israel for the time being, but that they are ready to fight at any time.

"We have a deal with Hamas to abide by the truce as long as Israel abides," Abu Bakir said. "But once it violates the truce, we fire our rockets without any consultation with Hamas."

The interview gave a rare glimpse at the inner workings of Gaza's Salafis, radical and ultraconservative Islamic groups that dream of turning Gaza into an Islamic caliphate.

The groups have created a headache for Hamas in recent years, accusing the Islamic militant group of being too soft on Israel and failing to adequately impose religious law on Gaza. 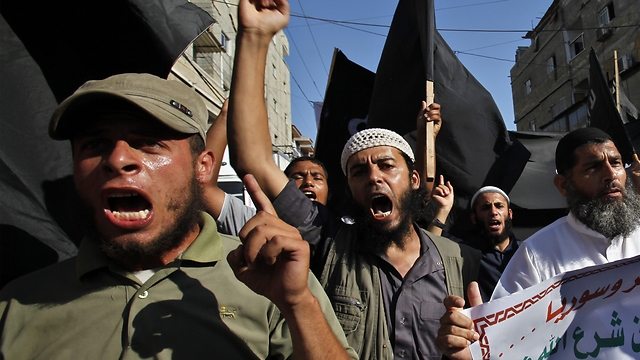 Salafi protest in Gaza (Photo: AP)
Salafi groups have been suspected in the bombings of Internet cafes and music stores, intimidation of Gaza's small Christian community, the kidnapping of a BBC journalist in 2007 and more recently, the death of an Italian activist in 2011. Salafi groups are also believed to cooperate with militants in the neighboring Sinai Peninsula in Egypt to attack Egyptian and Israeli targets. Gaza's Salafis support al-Qaeda's campaign of global jihad, but are not believed to have direct links with the global terror network. In contrast, Hamas says its struggle is solely against Israel. Abu Bakir agreed to be identified only by his nom de guerre, fearing that publication of his real name could land him in trouble with Hamas or Israel. Abu Bakir, who said he has survived three Israeli assassination attempts, is well known among journalists in Gaza. A former spokesman for his group "Aknaf Bayt al-Maqdis" agreed to organize a meeting after repeated requests from the AP. The interview took place March 5 in Gaza City's Shati refugee camp, located on a street flooded by sewage. Abu Bakir wore military-style clothes, with khaki pants, black boots and a black sweater. He had a pistol tucked into his pants, and in the style of Salafis, had a long black beard and no moustache. His office was lined with photos of militants killed in battle, and he drove away on a motorcycle after the interview. Abu Bakir said he was a former member of Hamas' militant wing but broke away after the group agreed to participate in parliamentary elections in 2006. He was later arrested by Hamas for allegedly forming "terrorist groups" and "harming national interests" for firing rockets into Israel during a time of truce, and for attacking hair salons and other shops. Abu Bakir said he spent three years behind bars and was beat and kept in solitary confinement by Hamas. Today, he said his group, also known as "Jaljalat" or "rolling thunder," is honoring an uneasy truce with Hamas. Abu Bakir said that since late 2012, Salafi groups have formed a loose alliance. "We are six groups and we have thousands of fighters, maybe 4,000," he said. A Hamas official said he believes there are at most dozens of Salafi fighters, while an Israeli expert on al-Qaeda, Aviv Oreg, estimated there were up to 1,000. Under the local truce agreement, the Salafis have halted attacks on shops, hair salons and coffee shops after Hamas provided assurances there would be no drinking of alcohol, racy movies or mixing of the sexes in these places. "If Hamas stops preventing the bad things in these places, we will return," he said. He also confirmed that his group was behind the death of Vittorio Arrigoni, an Italian pro-Palestinian activist killed in Gaza in April 2011. He claimed that Salafis initially kidnapped Arrigoni in hopes of arranging a prisoner swap with Hamas, but after Hamas rejected their demands, they killed the Italian for allegedly fraternizing with Muslim women and engaging in espionage. He gave no evidence to back his claims. Abu Bakir said the group has halted attacks on Christians, as long as they "abide by the rules." That means no public displays of crosses, and consumption of pork and alcohol -- both banned under Islamic law -- must take place in private. He also claimed that 100 Gazans have gone to Syria to battle the regime of President Bashar Assad, and 10 have been killed so far. A Hamas spokesman confirmed a truce is in effect with the Salafis, but said the groups are much smaller than Abu Bakir claimed. He spoke on condition of anonymity because he was not authorized to discuss the matter with journalists. Mohammed Hijazi, a Gaza-based expert on Salafi groups, said their numbers have grown in recent years because of an influx of money from wealthy Gulf Arab states opposed to Assad. He said the money is meant to bring fighters to Syria. "The jihadists in Gaza are not a popular movement. Rather, it is an elite movement. It attracts fighters," he said. Oreg, a former head of the Israeli military unit that tracks al-Qaeda, said Salafis in Gaza cooperate with counterparts in the Sinai. Oreg said Hamas has pacified Salafis in Gaza to a certain extent, but turns a blind eye to Salafi attacks on Israel carried out from Egypt. "The main threat of these groups on Hamas and Israel is that they can disturb the status quo," Oreg said.