Israel Police at the home of the family of terrorist who killed Dalia Lemkus on Monday.

Family's of terrorists behind the recent wave of terror attacks in Israel were sent demolition notices on Thursday after Netanyahu's approves move at emergency cabinet meeting.

Family members of some of the Palestinians who were involved in the last wave of terror attacks received demolition notices on Thursday. The decision to demolish the homes was made by Prime Minister Netanyahu in an emergency security cabinet meeting held with legal officials Thursday.

Following the meeting, Netanyahu gave the instruction to quickly demolish the houses of the family's of terrorists who initiated attacks in Tel Aviv and Gush Etzion this week, as well as that of a terrorist who conducted an attack in Jerusalem during the summer. 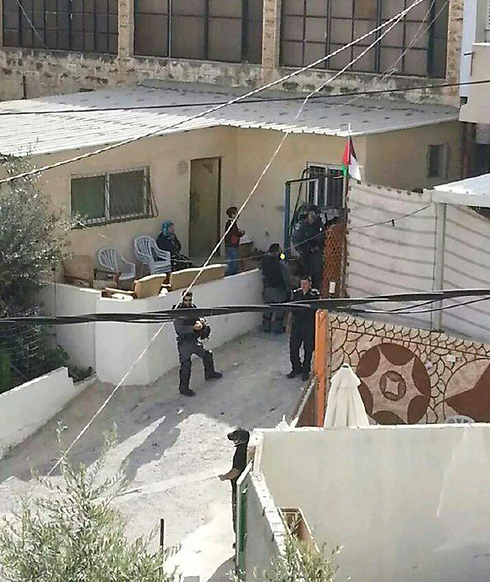 In some of the orders, which were distributed by the Home Front Command, it was instructed to only demolish certain parts of terrorists' familys' houses.

A 2005 military committee failed to find proof that destruction of terrorists’ homes serves to deter future terror attacks. In wake of the findings and criticism by human rights groupsm the Defense Ministry decided in 2005 that the demolition of homes of suicide bombers would stop unless there was “an extreme change in circumstances”.

Demolition notices were distributed to the family of Mohammed Naif Ja'abis (23) from Jabel Mukaber in East Jerusalem, who was behind a tractor attack in Jerusalem during Operation Protective Edge.

Ja'abis carried out the attack using the tractor he was working on in Jerusalem, stricking and killing a 29-year-old coworker, and overturning a bus that wounded five other people before being shot dead by police and armed members of the Prison Service. Another demolition notice was given to the family of Moataz Hejazi, a 32-year-old Islamic Jihad opeative from Abu Tor, who was behind the assassination attempt of Yehuda Glick.

Glick was shot by Hejazi who was waiting for Glick outside of a conference discussing the Temple Mount at the Menachem Begin Heritage Center in Jerusalem. Hours later, the would-be assassin was killed by security forces.

Additionally, measures were made at the home of Nur a-Din Hashiya at the Askar refugee camp on the outskirts of Nablus. Hashiya was behind the stabbing attack that killed the IDF soldier Almog Shiloni in Tel Aviv on Monday. The demolition was set for parts of his family's house.

Initial measures were also taken at destory the home of Maher al-Ashlamun, the terrorist behind the stabbing attack in Alon Shvut that killed 26-year-old Dalia Lemkus on Monday. His family had already evacuated their home in Hebron, suspecting it would be demolished. Al-Hashlamun, apparently intended to commit a vehicular terrorist attack. When he failed to run over anyone, he drove into the concrete bollards at the hitchhiking stop outside the West Bank settlement, got out of the vehicle and started stabbing the civilians who were there. He was shot in the chest by Alon Shvut's security guard, and was also taken to Ein Kerem Medical Center in serious condition on Monday.

Al-Hashlamun is a member of Islamic Jihad and was jailed in Israel from 2000-2005 after he was convicted of throwing Molotov cocktails at an IDF patrol.