It's apparently much easier for Israeli PM to telephone Russian president than US president
Photo: Amos Ben Gershom, GPO

Israel saving its anger for White House, not Kremlin

Analysis: Israeli officials have realized that Putin's decision to lift ban on arms sales to Iran is more of a declarative political move rather than a practical move in the foreseeable future. So why fight with two world powers simultaneously if you can fight with just one?

Good days have come to the Middle East: Apparently, it's much easier for the Israeli prime minister to telephone Russian President Vladimir Putin in the Kremlin than US President Barack Obama in the White House.

The American administration should perhaps take note of the fact that Israel has quite a few channels of dialogue with the Russians, on different ranks.

Benjamin Netanyahu's telephone conversation with Putin on Tuesday was the highest Israeli effort to inquire about the Russian president's actual intentions when he lifted the ban on the sale of S-300 missiles to Iran. But the Russians don’t answer with "yes" and "no" or make clear commitments, and usually only say that they are taking the reservations into account.

That may be the reason why the Israeli response to the Kremlin's announcement was not unusually harsh: State officials in Jerusalem must have realized that Putin decided to lift the ban on the deal signed with the Iranians in 2007, but that so far the parties have not begun negotiating a different deal, and that it's unclear when such a deal will be signed and which missile models will be included in it. 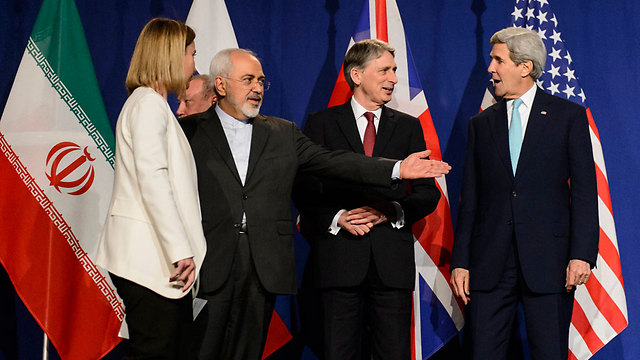 Nuclear negotiations in Lausanne. The secret document, once it is revealed, will likely show that the Americans have compromised much more than Tehran could have dreamed of (Photo: AP)

In general, Israel has apparently realized that the Russian announcement is more of a declarative move carrying a heavy political weight rather than a practical move in the foreseeable future. And because Israel has very little influence on the Kremlin's decisions as it is, Israeli officials have decided to save their vocal cords for different days and direct most of their anger at the agreement taking shape in Lausanne and at the White House's moves.

Why fight with two world powers simultaneously if you can fight with just one? Especially if the Russians are doing half of our job for us and making it difficult for Obama to get the Congress' approval for an agreement with Tehran.

Obama and the Democratic presidential candidates are about to suffer quite a lot from the Russian headache – not only in regards to the S-300 affair, which will be used by their Republican rivals, but also in dealing with Putin's ongoing disregard for the American administration, for example by sending Russian planes to harass American surveillance aircraft over Europe's skies.

In this battle, Obama's Republican rivals have even heavier ammunition: The document signed by Iran and the world powers, which has yet to be published. The big question is who is telling the truth: The Iranians, who claim that according to the document all the sanctions will be lifted a moment after it is signed, or the American administration, which says that it will be a gradual process.

According to estimates, the document's revelation will actually embarrass the Obama administration, as there is already a draft resolution in the Security Council cancelling all the sanctions against Iran, especially the economic restrictions which the ayatollah regime is particularly worried about.

In addition, the secret document, once it is revealed, will likely show that the Americans have compromised much more than Tehran could have dreamed of, for example by allowing limited activity in the Arak nuclear facility, although the Iranians were willing to close it, and by leaving out an Iranian agreement for supervision over its military facilities.

In addition to its many holes, this agreement is also expected to be vague and unclear, and I doubt the Congress will let Obama pass such an agreement without any changes.