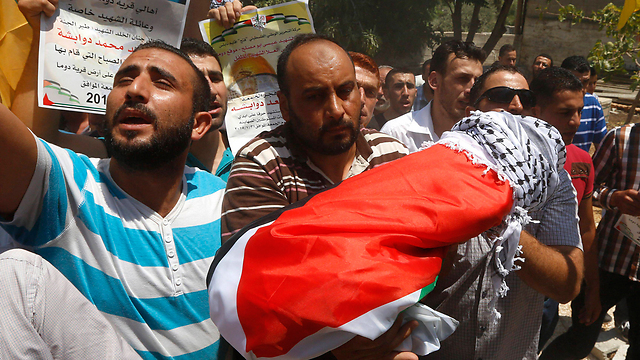 How to stop Jewish jihad

Analysis: They are no different than ISIS; there may only be a handful of these Jewish terrorists, but it is enough to divide Israeli society and lead to war with the Palestinians and the rest of the Arab world.

There is one thing the stabbing at the gay pride parade on Thursday, the arson that led to a Palestinian baby being burned to death early Friday, and the arson at the Church of the Multiplication several weeks ago all have in common.

These are not hate crimes, this is religious-messianic terrorism, committed by people who view themselves as acting according to God's true will. In simpler words - this is Jewish jihadism, identical in every detail to Islamic jihadism, except that, fortunately, this is not a mass phenomenon, the likes of which we have been seeing both in our region and in Europe.
Social Action
Anti-violence rallies throughout Israel after acts of nationalist, homophobic terrorism
Noam 'Dabul' Dvir, Roi Yanovsky, Ahiya Raved, Gilad Morag
Following two blood-soaked days, in which a Palestinian infant was killed and his parents and sibling were critically wounded in a fire and six people were hurt in a stabbing at Jerusalem's gay pride parade, thousands protest in Tel Aviv, Jerusalem, and Haifa.
Anti-violence rallies throughout Israel after acts of nationalist, homophobic terrorism

It may only be a handful, perhaps even 200 Jews, but in a small country like Israel - which exists atop a volcanic crater - such a handful is enough to tear Israeli society apart from within, and lead it to war with our neighbors the Palestinians as well as the Muslim world at large. The Jewish Sicarii, the fanatic political assassins in the Second Temple period, have already led to the destruction of the political and religious Jewish entity, and sent us into exile. This could happen again.

It is important to understand that this isn't about a handful of madmen. Most of the Jewish terrorists are sane, so it is hard to put them on trial because they know how to cover up their tracks. That is what the men of the Jewish Underground did in the early 80s, and what Yishai Schlissel did ten years ago. The problem is that they're sane, and clever, so there isn't enough evidence to put them behind bars in order to stop them from committing acts of terrorism. This is also why law enforcement authorities in Israel, the Knesset, and the courts cannot wash their hands of them. Had they treated Jewish terrorists the way they have been treating Arab terrorists, they could have prevented many of these acts of murder, arson and vandalism, which have been happening more and more often of late. Had they kept these "price tag criminals" in administrative detention for years, as they do with Arab terrorists when there isn't enough evidence for a conviction, the Jewish terrorists could have been stopped from carrying out their plans. Had they punished the rabbis that provide Halachic legitimization to the messianic-jihadist fervor, their numbers would have been reduced. Had the education system included in its core curriculum the teaching of tolerance, and required religious schools to include this subject in their curriculum as a condition to receiving state funding, the Jewish-jihadist fervor would have been reduced over time.

The results of Jewish jihad - an 18-month-old Palestinian is laid to rest after being burned alive by Jewish settlers (Photo: EPA)
It is also possible to change the rules of evidence and to enact emergency laws, because the Jewish jihad is just like the Islamic State's jihad - it's a messianic idea, which is fueled by passions and spreads like wildfire. The murder of the Palestinian baby and the severe wounds his family members suffered could spark a dangerous fire in the Palestinian territories and possibly even spread beyond our borders. That is why the IDF took, with good reason, far-reaching measures with one goal in mind – to flood the area with military and police in order to successfully deal with mass rioting without having to use live fire and kill Palestinians. Every Palestinian killed is more fuel to the fire that is already burning under the surface. We have to do everything to prevent more casualties. Ramadan is behind us, but today is Friday and the preachers in the mosques on the Temple Mount and elsewhere in the West Bank could bring the Palestinian street to a boiling point. The Palestinian Authority understands this, and that is why there is quite an effective cooperation between the PA's security forces and the IDF, but the imams at the mosque must be warned against inciting, and soon. This is the responsibility of the Palestinian Authority, but also of the IDF and Shin Bet. That is how we might be able to throw a blanket over the fire and prevent it from being fueled further. In the long term, Israeli politicians of all different sectors must come out against violent messianism of all kinds - both nationalistic and Halachic. We must realize that those who set fire to the Church of the Multiplication in Tiberias are also the ones who would burn a Palestinian baby and stab at the pride parade. The weakening of governance and law enforcement in Israel is playing right into their hands, and the government and security cabinet ought to finally convene to decide on serious and effective measures to stop Jewish jihadism. And let us not forget the line from Hayim Nahman Bialik's poem "On The Slaughter" - "revenge for the blood of a little child - has yet been devised by Satan."