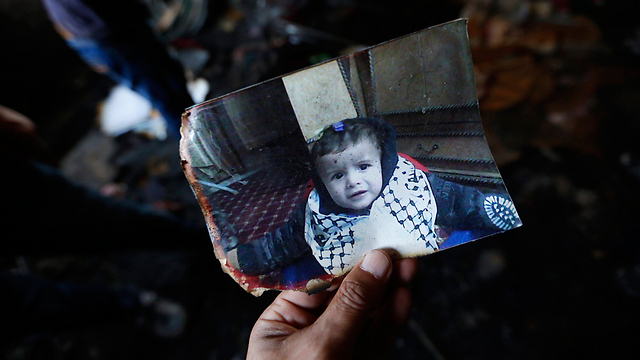 Jibril Rajoub tells Ynet that he views Netanyahu as responsible for every act of terror in the West Bank, but adds that outcry in Israel over killing of baby convinced PLO leadership that there is a rational voice in Israel.

"I very much appreciate all the condemnations that were expressed by Israeli society," senior Fatah official Jibril Rajoub told Ynet in an interview following the hate crime that killed Palestinian infant Ali Dawabshe in Duma last week. "It makes me hopeful that the Israeli people have rejected this heinous crime that was committed in Duma."

With that said, Rajoub clarified that he was not convinced by the condemnations that were uttered by the government in after the attack, specifically the condemnation aired by Prime Minister Benjamin Netanyahu. "Netanyahu and his right wing government are responsible, and stand behind every act of terror in the West Bank," said Rajoub. "They incite and provide funding, security, and support to the 'price tag' bullies. The murder of a child is a dark stain. I hope that after the shock and the upheaval, Israeli society will wake up and understand that the true existential threat to Israel's future is the occupation, and the settlements."

A photo of Ali in the burnt out home in Duma (Photo: EPA)

On Friday evening after the attack, the Palestinian leadership met in Ramallah in an emergency gathering, in order to decide on a response. Rajoub told Ynet that the outrage expressed in Israel over the murder and wounding of the Dawabshe family changed the spirit of those in attendance. "We said we must reach the right conclusion from this exceptional event in Israeli society, and understand that there are rational people with whom we can build ties in order to overcome the lack of a diplomatic process. The majority of the meeting's attendees spoke against incitement for revenge. I think that the reaction in Israel had influence (on the decision)."

He testified that the decision adopted in the meeting clearly did not include a green-light for clashes or revenge attacks. "If there was a plan to have the PLO push the Palestinian street towards clashes, the current situation would be very different. But the decision was clear, and the commanders of the security services were present, understood the tone, and their instructions."

The meeting with Rajoub took place on a day in which Palestinian Foreign Minister Riyad al-Maliki, submitted documents and information regarding the hate crime in Duma to the International Criminal Court in The Hague, as well as documents regarding other hate crimes against Palestinians in the West Bank. "We will go to any length in order to punish Israel, and expose the world to the truth, but we will not go the way of revenge, and the spilling of blood."

A short while after the attack, Hamas embarked on a planned path of incitement against Israel, whose sole goal was to push the Palestinian masses towards clashing with Israel. The organization took advantage of a previous call it had made for a "day of rage" as a result of events which unfolded on the temple mount during Tisha B'Av. Despite the attack and the calls for violence, only small groups of rioters clashed with Israeli security forces during that afternoon.

Rajoub explained that we cannot conclude this means the Palestinian street is simmering. "We do not posses the ability to prevent and convince a nation which has no hope," he said. "There is tension and it is illogical to ignore it. The ball is in your court, or the world's hands, and that is why we have turned to the International Criminal Court, the Security Council, and all the international bodies, so they get involved. We deserve protection."

Rajoub believes that as a result of the severity of the incident, the perpetrators of the hate crime in Duma will be apprehended by the Shin Bet, but he does not hang much hope on their capture, if it even happens. "I think that they have an interest to capture the attackers, but the question is if they have the ability to deal with Ayelet Shaked and Naftali Bennet. Will they really destroy the homes of those who killed the little baby? No. He will be place in a five star facility until someone comes along and pardons him."