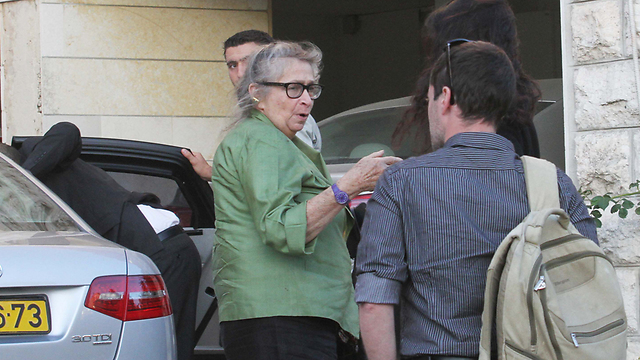 Due to possible incitement against President Rivlin on social media, a personal security detail has been assigned to his wife Nechama.

Nechama Rivlin, wife to President Reuven Rivlin, was issued a personal body guard some two weeks ago, due to alleged incitement to violence against her husband on social media.

This is the first time Nechama Rivlin has been issued her own security since her husband became Israel's president. Up to this point, she insistently opposed altering her life over security concerns.

In the past few months, the president has been absorbing attacks on the internet, especially after he expressed his feelings that "members of my people chose terror" in the arson attack in which several members of the Arab Dawabsheh family, including 18-month-old Ali, were killed. Since then, Rivlin's Facebook page has been filled with hostile comments, including some threats.

Nechama Rivlin. (Photo: Ido Erez)
In the summer, Rivlin gave a speech in Jerusalem's Zion Square, in which he decried the "blood bath and hateful campaign against Palestinians and members of the gay community." Following that speech, a photo of him wearing a kaffiyeh (a traditional Arab man's headdress) was disseminated online.

Hagai Amir, brother of Yitzhak Rabin's assassin Yigal Amir, was arrested last week on suspicion of incitement against Rivlin. "Rivlin is a sycophantic politican," Amir said in a Facebook post.

"He cannot decide whether or not my brother is released, only the Almighty decides - as He decided that Rabin would drop dead despite Rivlin and his friends not really agreeing, the Almighty decided that Rivlin would be president, and it's time for Him to decide that Rivlin and the Zionist state must disappear from the world just as Sodom did because of the crimes they 'lawfully' committed against their people. Today that day is no longer far away."