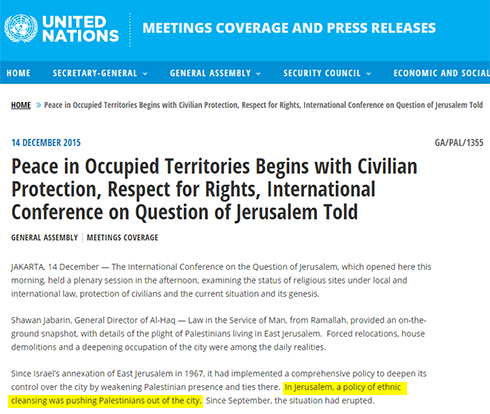 UN secretary general says wave of terror 'is bred from nearly five decades of Israeli occupation,' while a press release about the conference says Israel is working to push Palestinians out of Jerusalem.

WASHINGTON - An official UN press release about a conference held this week in Indonesia accuses Israel of "ethnic cleansing" of Palestinians.

"In Jerusalem, a policy of ethnic cleansing was pushing Palestinians out of the city. Since September, the situation had erupted," the press release states, quoting comments made at the conference.

The International Conference on the Question of Jerusalem, held in Jakarta and organized by the Committee on the Exercise of the Inalienable Rights of the Palestinian People and the Organization of Islamic Cooperation, is sponsored by the United Nations. The conference included, among others, the London-based Palestinian Return Center, a Hamas-affiliated organization that was recognized by the UN earlier this year.

The press release on the UN website.
Shawan Jabarin, the general director of a Ramallah legal center, is quoted as saying that "Since Israel's annexation of East Jerusalem in 1967, it had implemented a comprehensive policy to deepen its control over the city by weakening Palestinian presence and ties there." "Those practices had formed the root of the current problems," he said. "But, the Palestinian people would not give up. It was time for States to sever cooperation with Israel, ban settlement products and implement sanctions. Without those and other similar actions, the situation would remain the same or worsen." A statement from UN Secretary-General Ban Ki-moon was read out during the conference, in which he claims that "The anger we are witnessing is bred from nearly five decades of Israeli occupation. It is the result of fear, humiliation, frustration and mistrust."

Ban goes on to say that "Palestinian youth in particular are tired of broken promises and they see no light at the end of the tunnel."

He also condemned both violent attacks against Israelis and rocket fire from the Gaza Strip, and stressed "the urgent need for leaders to rein in incitement, for Israeli security forces to ensure a calibrated use of force in response to incidents, and for all of us to address the prevailing lack of a political horizon to end the occupation and achieve a negotiated two-states solution."

At the same time, he reiterated his condemnation of settlement construction, calling it "an obstacle to peace," and urging both sides to refrain from attempts to establish facts on the ground.

Israel's Ambassador to the UN Danny Danon slammed the comments made at the conference, saying that "instead of wasting time trying to excuse Palestinian terrorism, the UN must work with the Palestinian Authority to eradicate the incitement that's coming from the highest ranks and trickling down to the education system and social media."