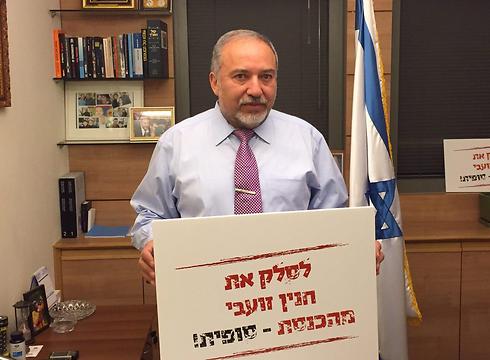 'Together, we will kick out terror supporters from the Knesset,' says Yisrael Beytenu leader who is promoting a bill to prevent Supreme Court from overturning decisions to ban candidates from running for parliament.

"Together, we will kick out terror supporters from the Knesset," Lieberman said in a Facebook post. In a video posted on his official Facebook page, the Yisrael Beytenu leader calls on the Israeli public to pressure MKs to support his new bill proposal that seeks to remove both Zoabi and her party Balad, currently a part of the Joint Arab List, from the Knesset.

Lieberman holding a sign calling to 'Kick Haneen Zoabi from the Knesset - for good!'
Lieberman notes in the video that the Central Election Committee has, in the past, banned both Balad and Zoabi from running for Knesset, but the Supreme Court overturned the decision. Lieberman's bill seeks to prevent the Supreme Court from interfering in decisions made by the Central Elections Committee to approve or ban a candidate or a list from participating in the elections for parliament. "The disqualification was done in line with the law, according to which those who support terrorism and an armed struggle against the State of Israel, or those who reject Israel's existence as a Jewish state, will not be able to serve in its parliament," Lieberman said. "There is no doubt that the party of the traitor and spy Azmi Bishara and his successor Haneen Zoabi is doing this publicly, and it is time they paid the price," he added.

Lieberman criticized the government that he says opposes his proposal. "So I ask you, the public, anyone who cares about the State of Israel and thinks these terror supporters do not belong in the Knesset - to like, share and demand ministers and MKs from the Likud, Bayit Yehudi, Kulanu, Shas and United Torah Judaism to support the bill."

Zoabi released a statement on Wednesday afternoon in which she described Lieberman as a “dangerous political figure” and a “fascist.”

“He is trying to gain cheap and inappropriate popularity by attacking and inciting against me and against the public that I represent,” Zoabi wrote.

“This is a classic conflict between democracy and fascism. I represent justice, democracy and human rights, and Liberman represents fascism and hateful politics. Obviously my democratic principles irritate an opponent of democracy like Liberman,” she went on to say.

“This campaign and its name will not deter me or move me from my struggle for the values in which I believe: justice, equality, freedom and democracy. I will continue to struggle for my people and their just struggle,” Zoabi concluded.

Meretz MK Issawi Frej slammed Lieberman's campaign, saying, "Lieberman, who has for years been polluting Israeli politics with corruption and fascism, is the one who should be kicked out of the Knesset and from public life.

"Lieberman's bill proposal seeks to destroy what's left of democracy here, and turn us into the kind of democracy led by his friend Putin, one that crushes every opposition and silences every opinion it doesn't like."