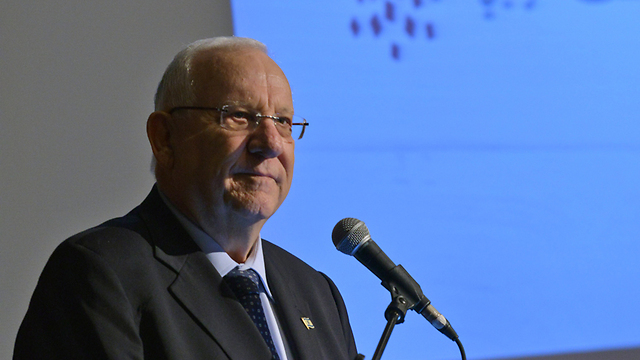 Hatred within the camp

Op-ed: As an expert on the history of the movement which brought him to the President's Residence, Reuven Rivlin knows that once a leader deviates from the party line or causes damage to its image - there is no forgiveness.

President Reuven Rivlin can go out of his way, announce "Good morning from Jerusalem" on the radio three times a day, and mention our capital's name at every opportunity. It will no longer do him any good. He has been marked in the national camp as the people's enemy, as a person willing to give up the Land of Israel in favor of "the other" camp.

Rivlin is an expert on the history of the movement which brought him to the President's Residence - his biggest dream in life. In his movement, he knows there is no forgiveness. Once a leader deviates from the party line or causes any damage to its image, even allegedly, it will not be forgotten until his very last day. And there are plenty of examples: Hillel Kook, Shmuel Merlin, Eri Jabotinsky, Eliezer Shostak, Aryeh Altman, Ezer Weizman and many others.

Rivlin may argue that the media distorted his comments, that his words were interpreted the wrong way. Let him talk to the walls. One radio broadcast will erase 60 years of work in the movement and education in a national home. Soon they will tell the joke that he tells about others: He received good education at home, but has not been home for a very long time.

Here's an example of unforgivable hatred, which Rivlin is familiar with: In the mid 1960s, Shmuel Tamir, Ehud Olmert and others came out against Menachem Begin for repeatedly losing the elections. Tamir and Olmert spoke at the Herut movement's conference, and Olmert delivered a scathing and bold speech. At the end of it, he was applauded by a friend of mine, the late Amiram Bukspan. Begin's son, Binyamin Ze'ev, who was present in the auditorium, noticed my friend's applause from the corner of his eye, and from that moment onwards and for decades, although they had been friends in the past, the two didn’t even exchange hellos. Bukspan was erased from the national camp.

has been marked in the national camp as the people's enemy (Photo: Kobi Gideon, GPO)

This animosity, of course, doesn’t only exist "domestically." It's sometimes hard to understand the depth of the hatred between the two main rival camps in Israeli politics. While it's a known thing that Jews like to hate each other's camp - there is no need to mention the story of the two Jews who found themselves on a deserted island and built three synagogues - it's all the more true when it comes to Israelis.

But in this case, the phenomenon is unique in its nature and dimensions: People will continue to support their camp, the Likud let's say, even if it hands the Western Wall over the to the Palestinians in a festive ceremony. That applied to the first generation of national camp supporters, and it applies to members of the second and third generations as well. They carry the scars of the parents' generation and will not forget the behavior of those leaders who believed they would hold onto the reins of the government until the end of generations: The arrogance, the bragging, the persecution, the corruption and the favoritism which ruled the roost.

But the disagreement today is not just ideological and political anymore. The Likud, which rose to power in the 1977, almost 40 years ago, was quite terrified in its first years in power. It lacked the suitable people to man all the senior positions. Menachem Begin himself showed his people the way. Apart from a bureau chief (Yehiel Kadishai) and a secretary (Yona Klimovitsky), he left all the senior government workers from the days of Mapai in his bureau and enjoyed being the Mapainiks' "boss."

The years taught people where the centers of power are, and they realized that the Likud government is no accident and is here to stay. For that reason, they began eying the attractive positions. Today it's no longer an ideological issue, the way one was raised or belonging to a certain camp, but a battle - a real war - over livelihood and honors. And that's another reason for a fight between and within the camps.