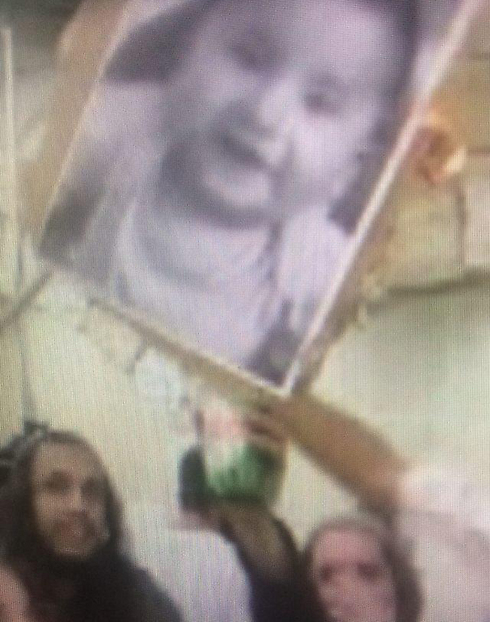 The enemy within: The danger of radicalism

Op-ed: The ultra-right extremists have become a problem that can't be ignored any longer. It's not enough to condemn. It's too easy. It's time to do something.

It's not that we didn't know. We knew. We suppressed. We saw them here and there. Here and there they deigned to say something into a microphone. But the nightmarish spectacle at one of their members' wedding laid bare the scale of the horror, and most of all the size of the danger.

We have a group, consisting of more than a few dozen, which has lost its humanity. The images that Roi Sharon aired on Channel 10 make it impossible to suppress any longer. They are the enemy within – murderous Jewish jihad. Dozens of youths spurred by hateful rhetoric, with one of them stabbing the picture of a baby who was already murdered – what else could we ask for to ring all the warning bells?

The images shown by Roi Sharon on Channel 10 don't allow us to deny this anymore. Dozens of enthused youths shouting hateful cries, with one of them stabbing the photo of an already-murdered baby – what more do we need to raise all of the alarms?

In recent days, even before the pictures from the dance of blood were aired, representatives of the right came to their senses. Both the leader of Bayit Yehudi and the chairman of the Yesha Council stood by the Shin Bet in its complex struggle against the racist cancer. In addition to the hardcore, which is gripped by hatred for anything other than itself, there is the circle of supporters and sympathizers and apologists. There's the ideological leadership, which includes people like the authors of The King's Torah (a Jewish religious book which discusses when it is and isn't permissible to kill non-Jews). Only recently they received exemption from standing trial.

After all, everything is subject to the supremacy of "freedom of speech". And this freedom does not lead to "blowing off some steam", as the radicals claim. On the contrary. The more permissive you are, the more radical they become. And as they radicalize, the more words lead to action. Their spiritual leader, Yitzhak Ginsburg, who has – oh, the shame – the title of rabbi, wrote to his congregation: "The spirit of Zionism must be uprooted… the government, whether left or right, must be eradicated. And when a new one is formed, we will bring it down too, and so forth – until a rule of the Torah is instated in Israel… We must break the courts and subdue (the military) with a divine hand." Abu Bakr al-Baghdadi, the leader of ISIS, couldn't have said it better.

Bayit Yehudi Chairman Naftali Bennett. Came out against the extremists in his camp (Photo: Ido Beker)

The Samaria Settlers' Committee, a body that sprang up in the backyard of the settlements project and has previously received funding from the local council, backed the "price tag" hooligans and encourages "entry to adjacent Arab towns and taking destructive steps."

Another "leader" in the same mold, Bentzi Gopstein, wrote this week to his flock in honor of the Gregorian New Year that Christians are "bloodsucking vampires".

Will freedom of speech once again pop up to mark this abomination as kosher? Is it not time to change the rules of the game? It's not enough to condemn. It's too easy. It's time to do something. And if there's a need to implement uncomfortable methods – then they will be implemented. And if human rights are harmed – then they will be harmed. Because if we do not remove this cancerous tumor when it is small – it will go on and grow. And eventually, it will finish us all.

As part of Israel's legal processes and following the Bar-On Hebron affair (in which, in 1997, it was suspected that an illicit deal was struck between Shas and Prime Minister Netanyahu), it was decided that the attorney general would be appointed by a committee.

Former Minister Roni Bar-On. The Bar-On-Hebron affair impacts the AG nomination process to this day (Photo: Gil Yohanan)
A proper state doesn't need a kindergarten teacher to appoint an attorney general. But in this country, the meaning of democracy is the neutering of the elected ranks and transferring its powers to the professional, mainly judicial, ranks. The result is that Israel is number one in the world in adopting the formula of "committee headed by judge," which is replacing elected officials. This isn't democracy, it's a legislocracy. The committee that convened in recent months was supposed, like its predecessors have, to recommend three candidates. Otherwise, the tiny bit of elected officials' power would be erased. We could embrace cosmetic solutions for the problem. For example, make it so that there's no need to have a four-fifiths majority of committee members for a candidate to be recommended. But it seems that proper governance requires a return to the previous state, as is the case in enlightened nations. There's no need to label every candidate as having a corrupt relationship with the government. In the past this was done to Judge Yosef Shapira, when he was nominated as state comptroller. He was eventually appointed. The prophecies about him did not come true. He has kept his independence. In the United States, then-president John F. Kennedy appointed his brother Robert as attorney general. The Minister of Justice in Canada also has attorney general powers, and he can overturn decisions by the state prosecution. We can move on. In proper states no one turns every political appointment into a corrupt one. It's time Israel becomes one of them.

In 2007, student Liav Orgad participated in a human rights seminar run by the European Union. The EU's commissioner of minority rights was also participating. After a long lecture, Orgad asked it the majority also had rights. The commissioner was surprised. After a short deliberation, he said they didn't. The majority would have rights only if it became the minority.

Refugees coming to Europe. Does the majority have rights as well? (Photo: Reuters)
Eight years have passed. Orgad has since earned a doctorate from Harvard University and published articles in the world's leading legal publications. This week, his book, " The Cultural Defense of Nations: A Liberal Theory of Majority Rights," was published, aiming to tackle that same question. It was published by the Oxford University Press. The academic and judicial elites arrived. You couldn't pick a better time; these are the days of Europe struggling with questions of immigrants, minorities, and protecting the majority's ethos. It's a combustible subject, but Orgad handled it well. The book contributes something deep to the public discussion. Orgad details several methods of European nations to prevent people from gaining citizenship. For example, an asylum seeker who had spent 13 years in Spain couldn't name Barcelona's famous soccer stadium. He was disqualified. In other places, people are asked about skinny-dipping. That's not the way, Orgad claims. But the majority does have a right to check if the people asking to join them share their democratic ethos. Either way, Orgad, in his thirties, has become an academic star. He emerged out of a poor neighborhood and entered the top of the academic world. His book has clear implications for questions regarding the Jewish-democratic nation-state. Both the book and Orgad's ascendance are encouraging signs. It turns out you can stray from the choir's singing tone, step out of the box, and still succeed in academia.

I have no intention of giving an opinion on the Roman Zadorov issue. It's not that you can't criticize judicial verdicts. Of course you can. But there's something that doesn't align with common sense here. Sometimes the High Court of Justice  voids government decisions by deeming them "unreasonable." The decision has been passed with a five-to-four majority before. How can it be that the decision is unreasonable if four judges thought it was reasonable? The very fact that four of them decided it was reasonable gives it entry into the judicial "reasonability zone."

On the same note, how is it that a man is convicted when one of the three judges said he should be acquitted? The very fact that one of three judges, or two out of five, determined that an acquittal is in order, indicates that there is reasonable doubt. And it doesn't take more than a reasonable doubt to acquit.

About six years ago this topic was discussed by two expert committees. Some of the experts thought that if one judge acquits, there is a reasonable doubt that demands an acquittal. In the end, it was recommended that a minority opinion was cause for another hearing. None of the recommendations has been implemented. Here's another challenge for the Minister of Justice, since common sense cannot accept Zadorov, or any other convict, rotting in prison when there's a reasonable doubt about their guilt.