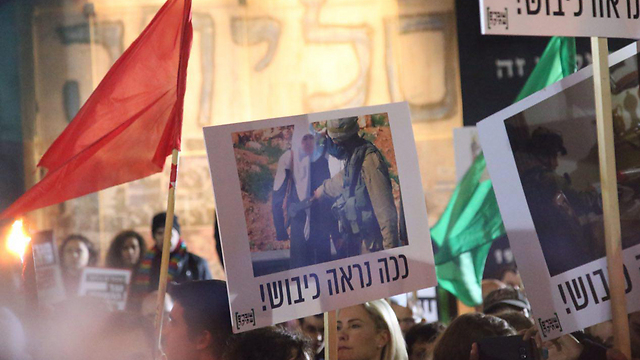 The two faces of fascism in Israel

At first sight, there is no connection between the "bloody wedding" screamers and Breaking the Silence activists. Those are in far right and those are in the far left. But the common ground is much bigger than what superficial look will tell you: Both despise democracy.

With the "price tag" people, this is a known thing. There is a supreme, external, Divine authority which dictates how they should act. The rule of the people, for the people, by the people, is a ridiculous thing when the people fail to see the supreme truth. And anyway, all operation and activation instructions have been given by the supreme source of authority. They despise democracy just like the members of political Islam do.

With the Breaking the Silence people, it's slightly different. Not everyone who warns of an exception despises the rule of the people. Not everyone who thinks there is room for profound self-criticism is the enemy of democracy. But the hardcore of those who represent them in the world has become addicted to a supreme, universal external authority. The debate over "external influence," which turns into "external coercion," is therefore the essence.

The appeal made by different radical left-wing bodies to the United Nations Human Rights Council and to the International Criminal Court in The Hague, or their support for sanctions or a boycott against Israel, stem from deep contempt for democracy. Their assumption is that there is no chance that the public will reach the supreme truth on its own, and therefore the people's sovereignty should be replaced with an external sovereign.

Breaking the Silence activists support the democratic game with a precondition: There is only one, supreme truth (Photo: Motti Kimchi)

In an article praising and glorifying Breaking the Silence, Prof. Zeev Sternhell argued that "the people don’t want to know the ugly truth," and clarified that this situation "undermines the foundations of democracy." His logic is sincere and fascinating. The assumption is that there is a supreme truth. He knows it, the majority knows it. The people are refusing to acknowledge it. The result: Coercion on the part of the source of supreme authority.

The "price tag" activists' spiritual shepherd, Rabbi Yitzhak Ginsburg, couldn’t have said it better. For them, it's the Divine sovereign. For the leftists who have despaired of democracy, it's the international sovereign. And so Sternhell's conclusion is quick to arrive: "Only external sanctions."

There is a difference between the followers of the two margins. Among the former, there is no pretension in the first place to accept a different opinion. They have never believed in democracy, so they have not despaired of it.

The latter raise the banner of democracy. They belong to a camp which recites Voltaire's testament on the freedom of expression every other day. They are in favor of "respecting a different opinion." But that's a deception, because they support the democratic game with a precondition: That there is only one, supreme truth. And if the people can't see it, they stop playing by the rules of the game and turn to the external sovereign.

Just like the avant-garde on the right is a small minority which despises the majority, Sternhell is also speaking on behalf of an avant-garde which is a small minority. According to him, Zionist Union Chairman Isaac Herzog and Yesh Atid Chairman Yair Lapid are also part of the disqualified majority. It's true that the international community, as reflected in the most important institutions, like the UN, is made up of a majority of dark countries, but is that really important? A fanatic mindset has never been confused by facts.

That's exactly what the avant-garde on the right is doing. That's what Sternhell is doing. He knows what is "good for the State." The people don’t know. So he will punish the ignorant people. He has been so preoccupied with fascism, that he has ended up adopting it.