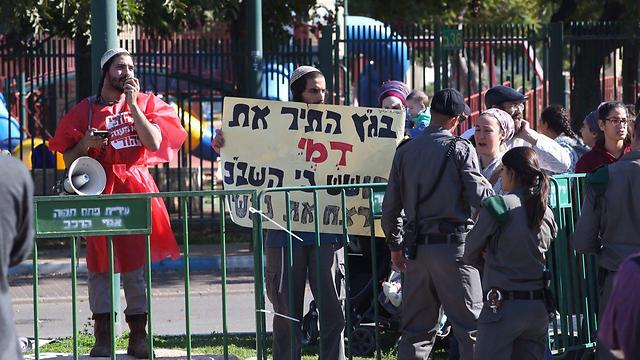 Duma arson suspect could be released to house arrest

State Attorney files prosecutor's statement against one of the Jewish terror suspects, but not in the Duma case, leading the court to order his release; state appeals decision.

One of the Jewish suspects arrested in connection with the murder of the Dawabsheh family could be released to house arrest soon after a prosecutor's statement was issued against him on Monday, but not in the Duma arson case.

By the end of this week, the suspects will have been under arrest for 30 days. The law dictates that an indictment must be filed within 30 days, but the Shin Bet does not yet know if and when indictments will be filed and on what charges.

The prosecutor's statement is used to allow the State Attorney and the police time to complete the work on the indictments. This requires keeping the suspects under arrest in order to prevent them from obstructing the investigation.

Protest against arrest of the Jewish suspects (Photo: Motti Kimchi)
The State Attorney issued an injunction against the release of the suspect to house arrest, while the state appealed the court decision to release the suspect, and a hearing on the matter will be held on Tuesday. The suspect has been in Shin Bet custody for 29 days, during 20 of which he was not allowed to meet with his lawyer.

"The prosecutor's statement that was filed today after all of the publicity and all of the media hype does not even deal with the Duma case, but with a minor and older incident," said Chai Haber from Honenu, the suspect's lawyer.

"This is the first time since the beginning of the investigation in which the court presiding over all of the remand extension requests in the case has expressed its discontent with the conduct of the investigators and ordered the immediate release of the suspect, after it was declared to him that he was not suspected of involvement in the Duma case," Haber went on to say.

Honenu called to form an inquiry committee to examine the Shin Bet and other law enforcement's conduct in the case. Despite reports of progress made in the investigation, there's a gag order preventing the reporting of any details, including the suspects' names.