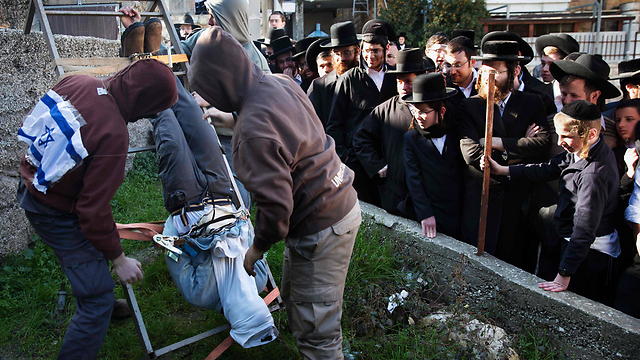 State appealed decision to release the teenager, but due to their intent to bring charges against him that don't directly relate to the Dawabsheh murders, he was released from custody and placed under house arrest.

The Lod District Court on Tuesday decided to release one of the Duma affair detainees to house arrest.

The court rejected the prosecution and police's appeal, upholding the Petah Tikva Magistrate Court's decision to release a teenager suspected of being involved in Jewish acts of terror to house arrest.

The suspect was interrogated by the Shin Bet for 29 days, under suspicion of involvement in the murder of the Dawabsheh family in the West Bank village of Duma in July, but the prosecutor's statement filed against him on Monday related to a different case.

He is expected to be under house arrest for 10 days.

Protesters demonstrating the Duma suspects' alleged treatment. (Photo: AFP)
The suspect's father was pleased with the decision. "We are happy that justice is starting to come," he said, "My son is a good, honest, sensitive guy. He loves the land and people of Israel and was in the middle of the IDF enlistment process. He wanted to contribute to the people of Israel and unfortunately they connected him to the affair and we knew beforehand he didn't have anything to do with it." While he was under arrest, the suspect wasn't allowed to meet with a lawyer. The father said: "They held him in difficult conditions, he was tortured. We are praying that he keeps contributing to the state and that he still has strength left after what he went through, and we demand an investigation into what happened. He gave them an alibi in the beginning of the interrogation. We are feeling helpless and have lost faith in the system."

The suspect's lawyer, Hai Haber. "The investigation was out of proportion." (Photo: Avi Moalem)
The suspect's lawyer, Chai Haber of the Honenu organization, said following the verdict: "After a month in which the suspect cried to the heavens that he wasn't connected with Duma, and cried that he hasn't done anything, and after the Magistrate's Court understood this yesterday, the state's appeal was rejected today and the suspect will be released."

Haber added, "The wide-scale arrests, the itchy trigger finger as far as interrogations, arrests, and the violent interrogation methods, the mortification, the humiliation and torture the suspects here have endured, are things they will be exposed to in the future. It's time to end this affair and I'm happy he was released."

The Honenu organization also called for an official inquiry into the matter.