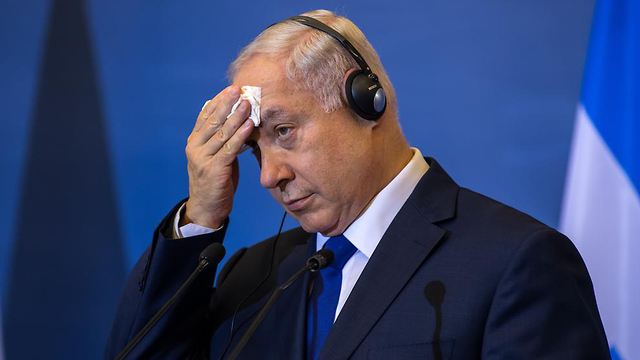 Thoughts about the coming elections and questions about Israel's security

Opinion: Netanyahu and anyone hoping to replace him should be concerned that while Iranian forces are present in Iraq, Syria and Lebanon the United States may restrict Israeli Air Force's ability to operate freely in the region.

Prime Minister Benjamin Netanyahu declared he will not allow the elections to be stolen.

The best way to preserve their integrity claims the PM, is by placing cameras in polling stations.

What should be done now that the government has ignored Attorney General Avichai Mandelblitt who strongly opposed the proposed legislation, and should members of Knesset pass the law, in a rush vote, with no substantial debate?

My suggestion is to add the following to the bill:

I suggest the parties competing in the elections declare that they will accept the results whatever they may be.

I also suggest the member of Knesset who represents the largest party after the vote, who will be mandated by the president, with forming a coalition government that has a majority support, be given 28 days only to complete the task and failing that, return the mandate. No extensions and no do-overs.

Naftali Bennet, former minister of education and member of the Yamina Party leadership said a few days ago that "Without a miracle" the right wing will not have a majority in the next Knesset.

He is not alone. Other politicians also warn the "rule of the right" is in danger.

In a democracy, it is worth remembering, leaders are not elected, nor do they remain in office with the help of miracles.

Leaders are not elected to hold on to power. They are elected to serve the Israeli public in its entirety.

For those voters concerned with the faith of the "Land of Israel" including the West bank, a government made up of a center-left coalition, should one be elected, will not likely bring about a return to the pre-Six Day War, 1967 borders. The chance for a two-state solution remains very small.

The challenge facing the new government will be ensuring equality for all people living inside the pre-1967 borders and those in the West Bank.

From the "Deal of the Century" promised by Trump, very little is left.

The president's promise to make the deal was somewhat childish considering its success was placed in the hands of real estate lawyers experienced in evicting low income families to make room for condominiums for the rich.

Greenblatt whose mission was to end the bloody conflict between Israelis and Palestinians, was vocally supportive of Israel and never of the other side.

It is irrelevant therefore, when the long awaited plan is unveiled because it is unlikely to make any difference in our conflict-ridden neighborhood.

From the British media we've learned that British Prime Minister Boris Johnson made a total of 28 minutes available to Prime Minister Benjamin Netanyahu, who travelled to the U.K. o see him, Thursday.

While the meeting, short as it was, took place at 10 Downing St. in London, Netanyahu's mind was most likely preoccupied with the space between Washington and Tehran and processes underway that will dramatically change U.S. policy towards Iran.

U.S. Secretary of Defense Mark Esper said progress was made in discussions on a possible Trump – Rouhani summit.

In other words, the relations between the U.S. and North Korea could be duplicated with the Iranian regime.

High ranking officials here say the meeting will likely take place on the sidelines of the UN General Assembly later this month in New York.

Unlike his humiliating behavior towards former president Barak Obama, Netanyahu appears to be avoiding any conflict with the current occupant of the White House.

What the prime minister and anyone who is hoping to replace him should be concerned with, is how to ensure Israel's security while Iranian forces are present in Iraq, Syria and Lebanon, if the United States restricts the Israeli Air Force's ability to operate in the region freely.

And finally, I recently published a book based on two years of conversations with Gen. Retired, Amos Gilad.

Gilad served as Head of the Military Intelligence Research Division and is today head of the Institute for Policy and Strategy (IPS) at the Interdisciplinary Center.

The book reveals some of the most sensitive aspects of Israel's security – From the First Lebanon War through the failure of agreements with the PLO in the 1992 Oslo Accords, and how did the Israeli Intelligence services try to gage survival chances and even the health of Arab leaders in the area.

Gilad believes Intelligence services should accept the fact that sometimes the younger, lower ranking officers are smarter than their experienced commanders.

Why? Sometimes they are just born that way.