Police Commissioner Yohanan Danino on Monday said that the Israel Police will allow lawful demonstrations in the Palestinian Authority and Israel ahead of a UN vote on the Palestinian statehood bid. He added that police would even see to the wellbeing of the protesters.

Danino announced that the police will conduct itself in the same manner as it had in the recent social protests but stressed that if the law is not kept, officers will take a firm stand to prevent other citizens' rights from being violated.

Extensive coverage of the showdown at the UN : 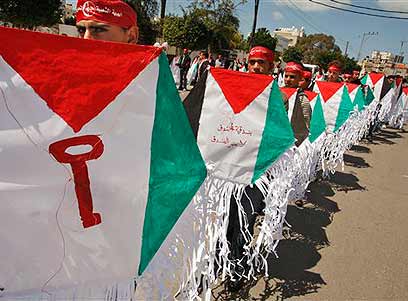 "September poses a different kind of challenge," the commissioner stated during a conference at the Interdisciplinary Center in Herzliya. "It can be said that recent events served as a preparation for September – such as the terrorist attacks near Eilat."

According to Danino, "The declaration of a Palestinian state, if it happens, will result in demonstrations in the territories as well as in Israel. I have instructed my subordinates to act tolerantly, sensitively and with restraint in order to prevent an escalation.

"However, all police officers know that breaking the law would be met without compromise by the police," he said. Meanwhile, Israeli sources said overnight that the Quartet was stepping up its efforts to bring about resumption of the peace process between Israel and the Palestinians.

Quartet Mideast envoy Tony Blair, together with US officials, is trying to formulate an agreed-upon plan that would be presented in the upcoming gathering of the international forum later this week.

The Arab League is also set to convene later this week to further discuss the Palestinian statehood bid. Israeli officials said that all attempts to draw up a document of principles agreed upon all parties have thus far failed. In addition, it appears that US "threats" by envoy Dennis Ross to cut aid to the PA in case it goes through with its UN bid, have also failed.

A senior state official said that Israel will not give up its demand for recognition as a Jewish state but would be willing to return to the negotiating table without preconditions.

"The Palestinian Authority is seriously conflicted in relation to the UN bid and Prime Minister Salam Fayyad fears a blow to relations with the US," he said.

Israeli state officials stressed that Jerusalem is considering taking unilateral steps in case the Palestinians go through with the UN campaign, but stressed that these will not include public moves annulling existing agreements.

"There's no need to make a fuss about it," one official said. "The IDF is already working in Area A despite agreements prohibiting such activity. We shall find more unilateral steps that can be implemented on the ground in response to the Palestinian move."