'The people want the Americans out'
Photo: Reuters

Jordan: Israeli embassy to be evacuated over protest

Israel decides to close embassy in Amman for the weekend as Jordanians plan 'million-man march' in area. Embassy staff to be sent home to Israel Thursday. Earlier, dozens in Amman burned Israeli, US flags

VIDEO -  Israel's embassy in Jordan will be closed early on Thursday over a mass protest scheduled to take place outside the embassy building in Amman.

For the past week, a Facebook page has been calling Jordanians to attend a "million-man march" towards the Israeli embassy in Amman. Fearing another violent raid such as the near-lynch at the embassy in Cairo over the weekend, Israel has decided not to take any chances and close the embassy.

Israeli embassy staff in Amman usually return to Israel every weekend, and on Thursday they will make the journey back earlier that usual.

Earlier on Wednesay, demonstrators demanded the closing of the US Embassy in Jordan over Wikileaks cables suggesting covert US plans to turn Jordan into a home for Palestinians.

It was a rare anti-American demonstration in Jordan, a close ally of the US.

The 70 activists burned American and Israeli flags in a noisy protest opposite the embassy in Amman.

They chanted, "The people want the Americans out." 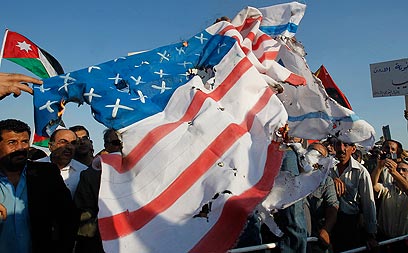 Roughly half of the country's 6 million population is of Palestinian origin. With Palestinian-Israeli peace talks stalled, some Jordanians fear Israel may try to deport Palestinians to Jordan.

This week Jordan's King Abdullah II spoke out strongly against using Jordan as a substitute for a Palestinian state, a concept favored by an extremist minority among Israelis.