US in midst of diplomatic blitz ahead of PA bid

America will try to avoid vetoing proposal at the Security Council, is trying to persuade six other nations to oppose bid; two African nations and Bosnia are toughest hurdles

At the start of a crucial diplomatic week, Israel is trying to block the planned Palestinian statehood request to the UN Security Council that was presented by Palestinian President Mahmoud Abbas on Friday in his address to the Palestinian people.

Members of the Quartet will meet in New York on Sunday in a last-minute effort to bring the two sides back to the negotiating table. The US will try to avoid vetoing the proposal at the Security Council and is trying to persuade six other nations to oppose the bid.

Diplomats at UN headquarters in New York are having a hard time determining which nations will oppose and which will support the Palestinian cause, so long as the PA has yet to submit an official request to the UN body. Security Council members that will support the Palestinians are Lebanon, Russia, China, Brazil, South Africa and India. The Americans are in the midst of a diplomatic blitz on the eight others: France, Britain, Germany, Bosnia, Portugal, Gabon, Columbia and Nigeria. 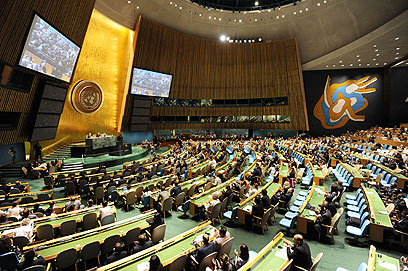 For a proposal to be defeated in the Security Council, a bloc of seven votes is required.

According to US officials, the two African nations and Bosnia are the toughest hurdles. In addition, the text submitted by the Palestinians will affect the democratic nations' decisions. Most of the European countries understand that establishing the Palestinian state's borders will harm the prospects of the resumption of negotiations.

US Secretary of State Hillary Clinton is holding meetings with EU Foreign Minister Catherine Ashton as part of the Quartet's effort to come up with a formula that would bring Israel and the Palestinians back to the negotiating table and clam the simmering diplomatic arena. Israel is not expecting much would come out of these efforts but officials in Jerusalem will nonetheless meet with representatives of the international forum to discuss the matter. Defense Minister Ehud Barak will leave late Sunday for a series of meetings in New York and Washington where he will meet diplomatic and defense officials. As far as the sequence of events at the UN General Assembly, the addresses by the heads of state are set to commence on Wednesday and will include the speech by US President Barack Obama. Also on Wednesday, the American President will meet Prime Minister Benjamin Netanyahu. On Thursday, Iranian President Mahmoud Ahmadinejad will take to the podium.

The addresses by Netanyahu and Abbas – scheduled for Friday - is expected to be the center of attention. The Palestinian leader will be the 14th speaker at the assembly while Netanyahu will address the forum three speakers later. 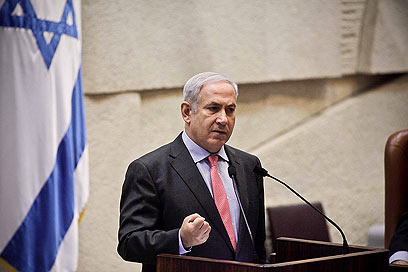 Netanyahu will talk tough at the UN (Photo: Noam Moshkovitz)

The prime minister is planning a resolute address in which he is expected to blame the Palestinians for refusing to reach negotiations. He plans on outlining the steps Israel has taken for the peace process and will argue that despite these steps, the Palestinians remain adamant in their refusal. Netanyahu will say that Israel is willing to hold negotiations but demands the other side recognize the Jewish state and declare an end to the conflict, including the non-return of Palestinian refugees. "We will not toady to the international community," sources in Jerusalem stressed. "Netanyahu will outline the Israeli truth and the reality as it is." If Abbas outlines his UN bid on Friday, a rapid voting procedure is possible within 24 hours, to be led by the current President of the Security Council – Lebanon, or the President of the General Assembly - Qatar. However, the Palestinians can also stall the vote for several weeks, during which discussions of the 66th General Assembly are held.

If Abbas declares on Friday that the Palestinians have decided to take the observer status route, without an ability to vote at UN bodies, they are granted a success. Even this watered-down version however can cause problems for Israel since Palestine would be recognized as a state and become a member in UN bodies such as the International Court of Justice at The Hague.