Ismail Haniyeh criticizes Palestinian president, says PA failed to consult with Hamas prior to deciding to approach UN for recognition. 'No leadership has the right to play with the people's rights,' he says

Hamas Prime Minister Ismail Haniyeh came out against the Palestinian campaign to achieve UN recognition on Sunday describing the move as a "political adventure which does not reflect national or Arab consensus."

The Hamas leader also called for a Palestinian-Arab strategic dialogue in the wake of revolutions in the Arab world which have isolated Israel. 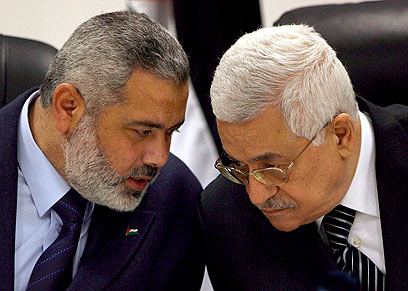 On Saturday, Fatah official Nabil Shaath admitted that the PA could have consulted Hamas on the UN bid more than it had.

Earlier on Sunday, Hamas official Khalil al-Haya expressed hope that the UN will recognize a Palestinian state not only on 1967 borders but on the whole of the State of Israel's territory.

"Recognition should be sought for the entirety of the Palestinian territory, and the Palestinian right to live within this country's borders acknowledged. We ask the UN to annul the entity that decided to settle on the land of others."

Hamas has been stepping up its anti-PA rhetoric in recent days offering criticism for its UN bid in response to Abbas's Friday address. The movement is mainly coming out against the omission of the issue of the right of return.

'Reality on the ground won't change'

Meanwhile, PLO Ambassador to the US Maen Areikat said Sunday that the Palestinians are aware that the UN vote will not change conditions on the ground, noting that "Israel is strong."

In an interview with CNN, he stressed that the PA cannot hold negotiations for negotiations' sake while settlements are being built.

Former US President Bill Clinton also addressed the Palestinians' UN bid on Sunday warning both sides of its "negative consequences."

In an interview with the NBC network Clinton said that the reality on the ground would not change after the vote and that both sides would have to return to the negotiating table.

He noted that he believed that the UN bid was the result of Palestinian frustration.