PM Netanyahu meets with Likud members ahead of trip to New York, says Israel will stand up for its rights; hasty agreement with Palestinians could prompt missile attacks on whole of Israel, Bibi warns

A hasty agreement with the Palestinians could produce a missile threat on the whole of Israel, Prime Minister Benjamin Netanyahu warned Tuesday in a meeting with Likud members. The PM convened Likud ministers and Knesset members for a festive toast ahead of his trip to New York, where he will deliver a speech at the United Nations General Assembly to counter the Palestinian statehood bid.

In his address Tuesday, the prime minister vowed to stand up for Israel's rights at the UN.

Likud members shook Netanyahu's hand and embraced him warmly ahead of his speech, offering their support in the face of the Palestinian UN bid.

"It is important for us to go to the UN and present our truth, that of a nation attacked time after time by those who object to its existence," the prime minister said, as he mentioned his proposal to Mahmoud Abbas – immediate resumption of negotiations. 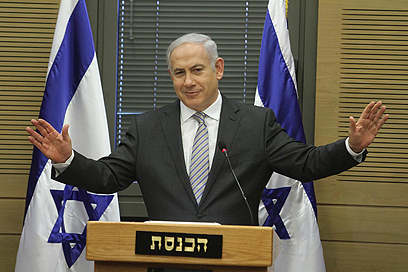 PM Netanyahu ahead of trip to UN

"We are extending our hand in peace. I said that the way to peace is through direct negotiations and not through unilateral declarations in the UN. In order to reach the end of negotiations, we need to start negotiations. That is something Israel is willing to do and that is something the Palestinians have avoided doing."

Jerusalem believes that the Palestinians have elicited a two-thirds majority at the Security Council, which will force the US to use its veto power in order to thwart the bid, but Netanyahu sees things differently.

"There is growing global recognition of the need to solve the various issues on the subject. We want peace with security arrangements and that means a serious meeting and insistence on our most essential interests is necessary. It is much easier to give in to pressure, much easier to gain applause from the international community by making immense concessions."

"The Arab Spring has been revealed as an illusion and many countries are starting to realize it's autumn," she said. "The public is beginning to realize that the Palestinians are peace refuseniks."

Education Minister Gideon Sa'ar criticized the Kadima party and said: "I suggest that the opposition show some semblance of national responsibility as we did during the previous Knesset term."

"The danger of a hasty agreement or a unilateral arrangement is missiles on the whole of Israel," he said.