Some 130,000 travelers took advantage of the second day of Rosh Hashanah and the relatively cool weather to visit Israel's parks on Friday. About 100,000 people ventured out to visit the Israel Nature and Parks Authority's sites, while another 30,000 toured the Jewish National Fund's parks.

According to officials of both bodies, the most popular locations this year included the Yarkon National Park, Caesarea, Ein Gedi and the Tel Dan Nature Reserve. Israel Nature and Parks Authority estimated that hikers avoided the water sites due to the strong winds.

Moshe Ashrian, a Kiryat Shomna resident, toured Ya'ar HaAyalim (deer forest) with his family, which gathered at the northern nature reserve from various parts of the country.

"We came here to ride ponies, hike, and enjoy with the family," he said. 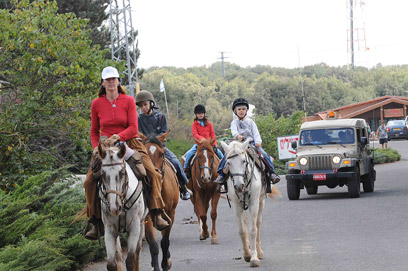 Horseback riding at Mount Odem (Photo: Avihu Shapira)
Ashrian's brother-in-law, Shaul Goren of Yahod, was especially impressed with the scenery. "The north is amazing," he said. "It's the perfect season as far as the weather goes, because it's not too cold or too hot."

Despite the traffic, numerous travelers were expected to frequent the country's parks on Saturday as well.