US Defense Secretary Leon Panetta said Monday that Congress's decision to freeze $200 million in aid to the Palestinians was a mistake. Panetta, who is visiting Israel for the first time since he assumed the role of US defense secretary, also noted that any Israeli strike on Iran must be coordinated with countries in the region.

In a press conference with Minister Ehud Barak at the Defense Ministry offices in Tel Aviv, Panetta said that this, "a critical time," was not the time to withhold funds from the PA. He added that both Israel and the Palestinians benefit from the aid transfer, noting that positive outcomes from the investment had been observed.

The defense secretary, who is also scheduled to meet with Prime Minister Benjamin Netanyahu, Palestinian President Mahmoud Abbas and Egyptian leaders, addressed the issue of Jonathan Pollard's release from prison, and Ilan Grapel's incarceration in Egypt. He said he could not address Grapel's release until he arrives in Egypt but noted that he hoped the dual US-Israeli citizen will be released soon.

Regarding Pollard, he said the issue was sensitive, noting that Obama had said that the US stance on the matter is not to allow the release of a convicted spy.

Referring to the Iranian threat, Panetta said that the world must make the Iranians understand that in order to become part of the international community they must stop their nuclear program and the funding of terror groups. 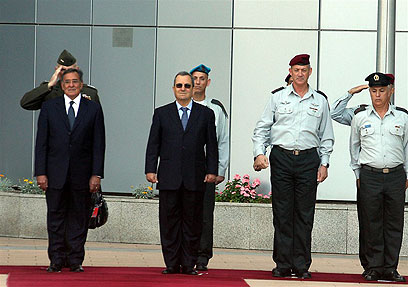 Addressing unrest in Damascus, the defense secretary noted that Syrian President Bashar Assad has lost his legitimacy. He noted that the international community and the US have agreed that Assad must step aside, and stressed that the US will continue to pressure Damascus into removing Assad from power and establishing a more responsible government.

Minister Barak noted that the US was Israel's best friend despite occasional disagreements. He added that Jerusalem hopes that the special relationship between the two nations, which is based on mutual values, will continue. Barak also said that President Barack Obama has recently showed true and unconditional support of Israel.

On Sunday, Panetta warned Israel that it was becoming increasingly isolated in the Middle East. He added Israeli leaders must restart negotiations with the Palestinians and work to restore relations with Egypt and Turkey.

In a blunt assessment made as he was traveling to Israel, Panetta said the ongoing upheaval in the Middle East makes it critical for the Israelis to find ways to communicate with other nations in the region in order to have stability.