Abbas: May all Palestinian prisoners be freed

Palestinian president meets French President Nicolas Sarkozy in Paris, says he is happy so many prisoners to be released as part of Shalit swap deal

Abbas thanked France for its part in finalizing the Shalit prisoner swap.

Hamas officials also expressed hope more prisoners will be released in the near future. Hamas official Mahmoud al-Zahar phoned the family of Abbas al-Sayed who planned the terror attack on the Park Hotel in Netanya in 2002 and is considered a highly ranking Hamas military-wing commander. He will not be released as part of the Shalit deal. 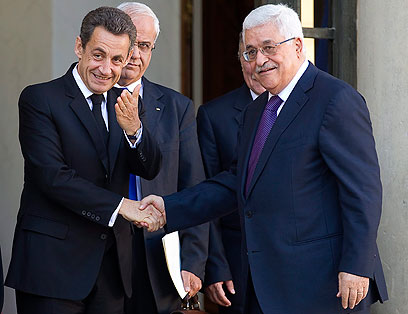 Also Friday, Hamas official Osama Hamdan declared that Israel had pledged not to hurt released prisoners as part of the Shalit deal, the London-based al-Hayat newspaper reported. Hamdan was responding to claims made by Shin Bet chief Yoram Cohen suggesting no prisoner was immune from assassination or a return to prison.

Hamdan also addressed the second stage of the deal which will see 550 prisoners chosen by Israel and Egypt released. "Egypt is the only party to guarantee the implementation of stage B conditions," he said.

"According to the finalized conditions, prisoners of the second stage will be regarded as security prisoners rather than criminal inmates, they will come from all parts of the political spectrum and all areas. Their health state, prison sentenced and time served will all be taken into consideration."