"The situation is intolerable and we are close to a dramatic decision that would end the bombardment of the south," cabinet member and minister Silvan Shalom declared on Tuesday.

According to the vice premier, "Hamas is the sole party responsible for the situation. Terrorist leaders send others to become martyrs but do not become martyrs themselves. If the (rocket attacks) do not stop, we will take direct action against the terrorist leaders and their infrastructure, action which has already proved itself in the past."

Netanyahu: No ceasefire, no negotiations 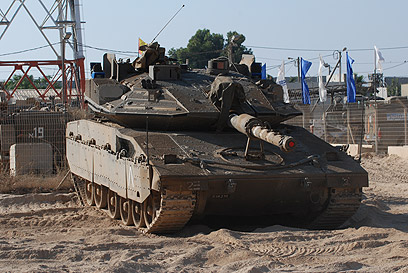 Earlier, an Egyptian official said that Israel had agreed to briefly delay expanding its military operations in the Gaza Strip to give Egypt time to try to persuade Palestinian factions to halt rocket fire on southern Israel.

The official said Egypt asked for 24 hours to try to bring all factions into an informal cease-fire and Israel agreed to give Cairo until around midnight Tuesday.

IDF aircraft have targeted rocket squads in Gaza in recent days, but the Egyptian official says Israel has also planned a wider operation. The official says Egypt asked for 24 hours to try to bring all factions into an informal cease-fire and Israel agreed to give Cairo until around midnight Tuesday.

The official spoke on condition of anonymity because he was not authorized to discuss Egyptian mediation. The Israeli defense ministry had no immediate comment.

But on Monday, Prime Minister Benjamin Netanyahu warned from the podium of the Knesset that Israel would operate "vigorously and resolutely" against those who would threaten its security. "A security philosophy cannot rely on defense alone," Netanyahu said. "It must also include offensive capabilities, the very foundation of deterrence." At least 10 terrorists and an Israeli civilian have been killed in recent days in the worst violence in the area in months. The Islamic Jihad faction had led the attacks that began last week, but on Sunday agreed to stop the violence if Israel also did. Rocket fire that drew retaliatory Israeli airstrikes persisted afterward, but it was claimed by a different group.

Gaza's Hamas leaders have not directly been involved in the attacks but Israel holds Hamas responsible for all violence from the territory.