Following the upgrade, trains in several lines will travel at an increased velocity of 200 kilometers per hour, significantly shortening travel times. 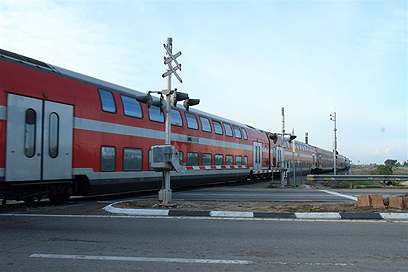 Israeli train - upgrade is on the way (Photo: Ofer Amram)

Transportation Minister Yisrael Katz instructed Israel Railways to improve train speed in new lines under construction from 160 to 200 km per hour where possible. At this time, due to outdated infrastructure, Israeli trains travel no faster than 140 km per hour.

The new line to the northern Israel town of Kiryat Shmona, on the Lebanon border, is planned to reach 300 km per hour by the next decade. The National Roads Company responsible for the construction of the Carmiel-Kiryat Shmona line is planning to increase the train's speed to 300 km per hour, aiming to significantly shorten the travel time from Kiryat Shmona to Tel Aviv.

The two first routes to enjoy the changes are the upgraded line between Tel Aviv and Beersheba, slated to be inaugurated in May, and the new line between Akko and Carmiel currently under construction.

The travel time between Beersheba and Tel Aviv is expected to be cut down to 52 minutes (30 minutes less than the current journey), and an additional boost in speed will shorten travel time by 10 more minutes.