Despite being picked for top intelligence unit, Gantz's son insists on combat service in paratroopers

Like father like son: Nadav Gantz, the son of IDF Chief of Staff Benny Gantz, is following in his father's footsteps and has joined Regiment 890 of the paratroopers, Yedioth Ahronoth reported Wednesday.

Benny Gantz, the current army chief, formerly served as the commander of Regiment 890, where he also met his wife, formerly a non-commissioned officer in the unit. 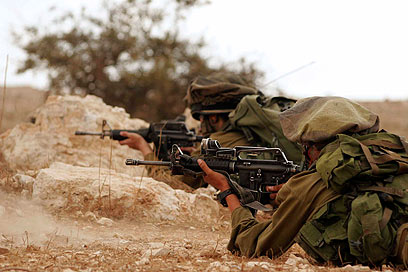 The decision taken by the chief of staff's son is unusual, as he was already picked for a prestigious role in the IDF's intelligence corps, where he's been serving in recent months.

However, after consulting with his parents, Nadav decided to leave his post in favor of a combat role. He subsequently filed an official request and volunteered for the paratroops brigade. The army followed the regular procedure in such cases and granted the petition.

Paratroop officers said Nadav is not granted preferential treatment because of his father, adding that he constitutes a role model for other soldiers who shunned a non-combat role in order to perform combat service.

Notably, the young Gantz rejected offers to join elite units within the paratroop brigade, instead opting for the less glamorous regiment where his father served.

The paratroop brigade is currently the home of another son of a senior Israeli figure – Yuval, the son of Knesset Member Tzipi Livni, considered one of the most prominent officers in his regiment.