A leading Islamist candidate in Egypt's presidential election has branded Israel a "racist state" and said a shared 1979 peace treaty was "a national security threat" that should be revised.

Abul Fotouh, a front runner in the May 23-24 election according to polls, had earlier described Israel as an "enemy" in a televised debate with his main contender, former foreign minister and Arab League chief Amr Moussa.

In Saturday's interview with the private Egyptian CBC satellite station, he said he had opposed the treaty since its implementation. "I still view the peace treaty as a national security threat to Egypt, and it must be revised." 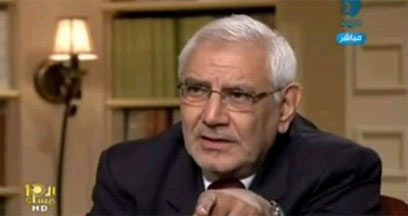 "It is a treaty that forbids Egypt from exercising full sovereignty in the Sinai and allows Israelis to enter Sinai without visas, while they need visas for Cairo," he said.

The treaty, in which Israel withdrew from the Sinai after capturing it in a 1967 war, does not allow Egypt a military presence in parts of the peninsula.

Abul Fotouh said Israel was "a racist state with 200 nuclear warheads" that continued to pose a threat to Egypt.

A moderate Islamist with support from both hardline fundamentalists and liberals, Abul Fotouh refused to describe Bin Laden as a terrorist, saying the term was used by the United States to "hit Muslim interests."

But he said the killing of the Saudi militant was an "act of state terrorism," and Bin Laden had deserved a fair trial, although he disagreed with Bin Laden's use of violence.

"If a just court sentenced him, then the sentence should be applied," he said.

Abul Fotouh's rival Amr Mussa has also argued for the revision of the treaty with Israel and described its policies towards Palestinians as an Egyptian "national security issue."

The election, which will go into a June run off if there is no outright winner in the first round, should end a military-led transitional period since an uprising toppled president Hosni Mubarak in 2011.

Mubarak is now standing trial on charges of ordering the shooting of protesters and selling gas to Israel at cheap price. The former air force chief was seen as a close regional ally of Israel, which is unpopular in Egypt.

After his overthrow, an attack by protesters forced Israel to close its embassy and Cairo annulled the controversial gas treaty, alleging lack of payment from Israel.

The Sinai pipeline that exported gas to Israel was bombed on an almost monthly basis by Bedouin militants following Mubarak's ouster.