The Israel Airports Authority (IAA) invoked special protocol on Saturday after four tanks containing 800 liters of a dangerous substance broke open and began to leak, some seven hours after being unloaded from an El Al cargo plane.

A 65-year-old man who experienced a burning sensation in his eyes was taken to the Chaim Sheba Medical Center at Tel Hashomer.

The tanks had been stored at the Maman group's Cargo Terminal warehouses according to procedure, Ynet learned. An unknown chemical reaction led the containers to break open and the acrylamide  substance to leak. 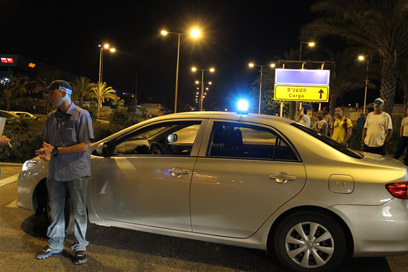 The area has been evacuated and experts on dangerous substances from Petah Tikva's fire station were dispatched to the site. Firefighters are trying to prevent leaks from the other containers, 10 of which were unloaded from the plane.

IAA chief Yaakov Ganot has barred aerial transport of acrylamide until the circumstances behind the event are made clear.

El Al's spokesman said that the incident occurred seven hours after a 747-400 Boeing airplane which departed from Belgium landed at the Ben Gurion Airport. "A malfunction occurred while the cargo was being unloaded," the statement said. "No damage was caused to the plane which departed for another cargo flight." The IAA said that it had invoked the hazardous substances protocol and that the incident is under the responsibility of the Maman Group. "The airport continues regular operations," the statement said.

Prof. Amnon Albeck of the Bar Ilan University said that acrylamide is toxic but has no immediate fatal effect. He said that the substance can cause irritation in the eye or the upper airway and that prolonged and intense exposure to it could prove lethal, but not in small amounts.

Earlier this week, a wide-scale drill simulating a crash landing and plane inflammation was held at the Ben Gurion Airport.