Britain does not consider Iran as a "clear and present threat" and will not aid the United States should it mount a preemptive strike on Tehran's nuclear facilities, The Guardian reported Friday.

According to the report, the London has so fat denied a request by US diplomats to use British bases – such as in the Ascension Island in the Atlantic and Diego Garcia in the Indian Ocean – to support the build-up of western forces in the Persian Gulf.

London argued that any preemptive strike "could be in breach of international law." According to the report, the UK Foreign Office's intelligence assessments do not deem the Islamic Republic's nuclear program as "a clear and present threat." "The UK would be in breach of international law if it facilitated what amounted to a pre-emptive strike on Iran," a senior Whitehall source was quoted by The Guardian as saying.

"It is explicit. The government has been using this to push back against the Americans." 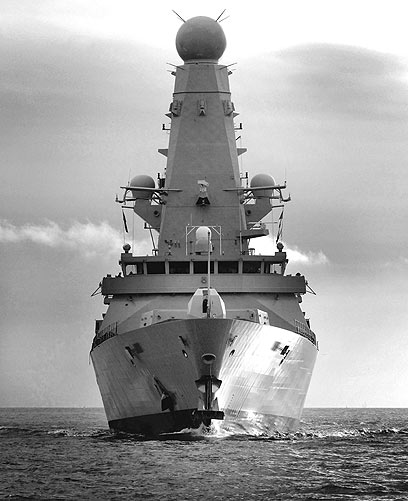 British Destroyer (Photo: EPA)
The newspaper quoted another source as saying, "I think the US has been surprised that ministers have been reluctant to provide assurances about this kind of upfront assistance." The Royal Navy has several warships in the Persian Gulf, including a nuclear-powered submarine. The Guardian further reported that a British military delegation met with US military officials in Florida over the summer "to run through a range of contingency plans." "It is quite likely that if the Israelis decided to attack Iran, or the Americans felt they had to do it for the Israelis or in support of them, the UK would not be told beforehand," a top London source told the newspaper. "In some respects, the UK government would prefer it that way." A UK Foreign Office spokesman said: "As we continue to make clear, the government does not believe military action against Iran is the right course of action at this time, although no option is off the table. "We believe that the twin-track approach of pressure through sanctions, which are having an impact and engagement with Iran, is the best way to resolve the nuclear issue. We are not going to speculate about scenarios in which military action would be legal. That would depend on the circumstances at the time."

A US state department official told the Guardian that, "The US and the UK co-ordinate on all kinds of subjects all the time, on a huge range of issues. We never speak on the record about these types of conversations."

Following the report, Prime Minister David Cameron's office said Friday that the British government is involved in military contingency planning with the United States on potential flashpoints in the Middle East – but insists it does not support any imminent strike on Iran's nuclear sites.

The statement confirmed that planning is being carried out with the US and other allies, including on the potential use by American forces of British bases overseas.