Iran 'will press on with enrichment'

Iran will go on refining uranium "with intensity" and the number of enrichment centrifuges it has operating will rise substantially in the current year, the country's nuclear energy chief was quoted as saying on Wednesday.

The comments by Fereydoun Abbasi-Davani, head of Iran's Atomic Energy Organisation, signaled continued defiance in the face of international demands that Tehran halt enrichment to the higher 20% fissile purity level, close down its Fordow enrichment plant, and ship out its stockpile of the material. 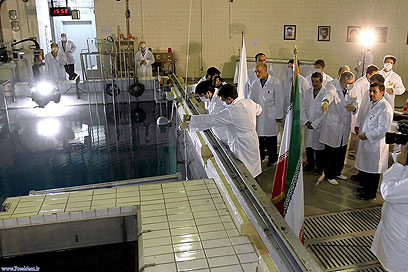 But he also said Iran would continue and possibly raise its output of reactor fuel using 20%enriched uranium - which suggests that less of it might be available for use in what the West suspects is an attempt to develop atom bombs.

Iran says it needs 20 percent refined uranium - as opposed to the lower-grade enrichment to 3.5% level needed for nuclear power plants - to turn into fuel for a medical research reactor in Tehran.

Diplomacy between Iran and the world powers - the United States, China, Russia, France, Germany, and Britain - has been deadlocked since a June meeting that ended without breakthrough.

Both sides now say they want to resume talks soon, after this month's re-election of US President Barack Obama.

Diplomats expect a new meeting in Istanbul later this year or in January. One diplomatic source said the powers would propose the first half of December but that the following month was more likely.

"We all recognize that there is a window of opportunity and that window is not very big and it is not going to be open for very long," another diplomat said. "The hope is that there will be a meeting (between the powers and Iran) in the near future."

Iran has faced a tightening of Western trade sanctions in the past two years, with the United States and its allies hoping the measures will force Iran to curb its nuclear program.

"Despite the sanctions, most likely this year we will have a substantial growth in centrifuge machines and we will continue enrichment with intensity," state television quoted Abbasi-Davani as saying. The Iranian calendar year ends on March 20.

But Abbasi-Davani did not say whether Iran would increase the work that most worries the West, the higher-grade enrichment of uranium to 20% purity.

Abbasi-Davani said Iran was continuing its production of fuel to power the Tehran reactor - which uses fuel converted from 20% enriched uranium - and could possibly increase its production from two "complexes" of fuel per month to three, according to state news agency IRNA.

That could help ease concerns over a recent increase in Iran's higher-grade uranium stockpile which Western countries fear could be diverted for use in a possible weapons program.

Because Iran's enrichment work at the same time continued unabated, the halt meant that its stockpile of the higher-grade uranium rose by nearly 50% to 135 kg in November compared with the level in the previous quarterly report in August.

Iran started producing 20% enriched uranium at the Fordow site, buried deep inside a mountain, in 2011 and has been operating 700 centrifuges there since January. A UN report this month said more centrifuges may soon be launched.

Abbasi-Davani said the Arak research reactor, which Western experts say could potentially offer Iran a second route to material for a nuclear bomb, faced "no problems" and was progressing towards a launch as normal, the website of Iranian state television (IRIB) reported.

This month's UN report showed that Iran has postponed until 2014 the planned start-up of the Arak complex, which analysts say could yield plutonium for nuclear arms if the spent fuel is reprocessed.