Op-ed: By banning Arab MK from elections, Israel would be turning her into an admired international figure

The conduct of Balad MK Hanin Zoabi during the Marmara affair left no doubt regarding her intentions or her integrity. But if we disregard the automatic rage she rouses in the heart of every Israeli Zionist, we will see that MK Zoabi is first and foremost a tragic hero of her life and of her absurd political career.

Whenever she goes out of her way to attack Israel ad portray it as a cruel, fascist and occupying country she is actually proving how tolerant and flexible Israeli democracy really is.
January Vote
Elections Committee to discuss Zoabi's disqualification
Telem Yahav
Balad Knesset member claims she's been marked by 'the fascist right'
Elections Committee to discuss Zoabi's disqualification

There is something very healthy, very resilient in a country that can afford to pay a salary to a parliament member who dedicates all of her time and resources to fight and weaken it. Therefore, unintentionally and in complete contrast to her worldview, Zoabi serves as a living and breathing certificate of honor for freedom of expression as it is practiced in Israel.

There are very few countries in which parliament members who hold such extreme views could walk around freely and enjoy all of the rights their special status grants them. 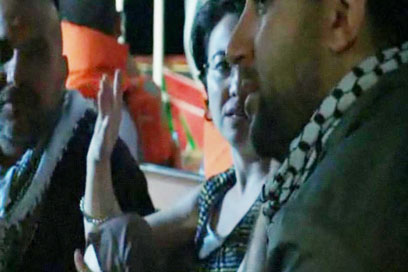 However – and this is very important – all of this is true only in the event that Zoabi remains a member of Knesset. As a member of parliament, the actual damage she can cause is almost negligible. But as soon as she is disqualified by the Central Elections Commission, Zoabi will become an international figure admired by all anti-Israel organizations.

By disqualifying Zoabi we would be taking a marginal Knesset member and turning her into a hero. And as a hero, fueled by her renewed hatred for Israel, Zoabi will roam the world as a victor. She will be invited to give lectures and, god forbid, she will be mentioned in the same breath as real freedom fighters.

We also have to be practical: It is no secret that the right has tried to ban Arab factions from the elections in the past. In some cases the Central Elections Commission even disqualified the factions, but all of these decisions were overturned by the High Court of Justice, and there is no reason to believe it will rule differently in Zoabi's case.