Op-ed: Former ambassador remembers Daniel Inouye, the US senator who asked 'What can I do for Israel?'

Israel has many great friends in America. None has been more loving, caring and supporting than Senator Daniel Inouye, who left us today.

Senator Inouye played a leading role in all major aspects of the strategic relations between America and Israel. He initiated transforming from loans to grants the American military aid to Israel, amounting to tens of billions of dollars over the years. He led the American support for the development of multi-layered Israeli initiated missile defense system, from Arrow, through David's Sling, to Iron Dome. He assured that Israel would not only be allowed to purchase most advanced American weapons systems for its defense, but also be able to develop its own cutting edge systems to assure Israel's qualitative military advantage over its enemies.

Inouye's support for Israel has never been conditional, nor has he ever expected anything in return. His voters in Hawaii were not Jewish, nor were they more supportive of Israel than in any other state in the Union. His love story with the Jewish people started when he was in the hospital, severely wounded, at the end of the Second World War. When his next bed neighbor shared with him the horrors he witnessed while liberating the death camps, young Inouye asked who the victims were. When told that they were Jewish, he wondered why. "I don’t know why, but people hate Jews" his fellow wounded soldier replied. This answer changed Inouye and his life. 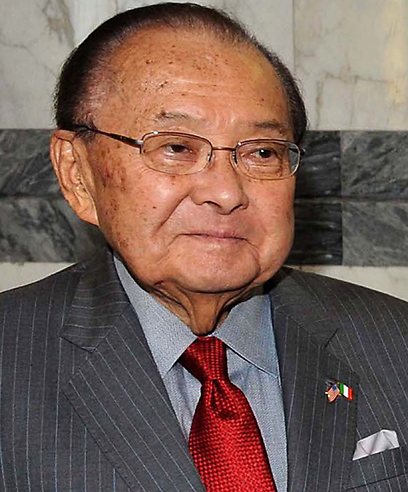 Being himself an American of Japanese origin, serving his country while his relatives were kept by his own country in detention camps, he embarked on a life long journey of standing with and for the Jewish people. He bound his soul with the Jewish people and vowed to do all he could to help Israel. From selling Israel's bonds as a young student to appropriating billions for Israel's defense as the chairman of the Senate committee, he has always stood with Israel. The room of this American hero and most powerful leader was decorated with Jewish menorahs. Every year, he made the effort to attend Israel's Independence Day celebration in DC to show his solidarity and support. His door and heart have always been open to Israel's representatives.

When I served as Israel's ambassador to the US, I had the privilege of meeting with him in this office. Whenever I was seeking a wise caring advice, help vis-à-vis the administration on critical issues, or achieving for Israel the almost impossible, I would ask to visit Senator Inouye. He has always been proud of Israel and concerned about its future. He profoundly understood the difficulties facing a tiny nation, the dangers emanating from the prevalent hatred towards the Jews and their state, and the existential challenges facing a Jewish democratic state in the Middle East. He unequivocally believed that a secure Israel is in the best interest of the United States and an important part of the American story. He was more than deeply concerned about the threat of a nuclear Iran. Concern for Inouye has been a call for action. "What can I do for Israel's defense?" He would ask.

Inouye was a pragmatic person. He once looked at me and said "I will not live forever." It is critical, he added, that Israel will always have true friends in the Senate, who will deeply understand and feel, and who will be ready to stand with Israel when it is not easy, when it is most needed.

Israel has many great friends on Capitol Hill, but there has only been one Daniel Inouye. A noble human being, an American hero, a lover of Zion.

Sallai Meridor is a former Israeli ambassador to Washington