Representatives of 'P5+1' nations and Islamic Republic to meet at end of January in Istanbul; IAEA chief Amano says not optimistic about talks on access to Iran's Parchin base

World powers will meet Iranian top representatives to discuss the Islamic state's disputed nuclear program in Istanbul at the end of January, a Russian official said.

The so-called "P5+1" nations - Iran and the five permanent UN Security Council members along with Germany - had not all met since a June meeting in Moscow.

But an unnamed Russian source on Thursday told the state RIA Novosti agency that the next meeting has been provisionally scheduled for the end of the month in Istanbul - host of the first such talks in April 2012. The source did not name a specific date or say when one might be announced. 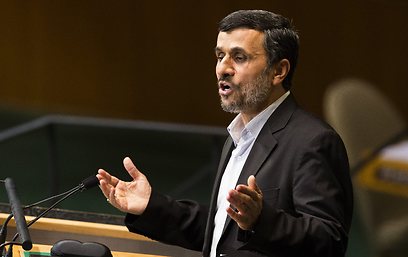 Iranian President Mahmoud Ahmedinejad at the UN (Photo: AP)
Three prior "P5+1" meetings have been held at the most senior level envisioned for the Istanbul session. None has produced a compromise that sees the powers accept Iran's right to enrich uranium in exchange for its provision of access to closed nuclear facilities and promise not to make higher-grade material.

Meanwhile, the chief of the United Nations nuclear agency said on Friday he was not optimistic about talks with Iran next week on getting access to a military base Western powers suspect is being used for atomic-weapons related work.

"The outlook is not bright," Yukiya Amano, director general of the International Atomic Energy Agency, said in Tokyo. He was referring to talks to be held next week on getting access to the Parchin military base and officials involved in Iran's nuclear program.

Israel, widely considered the Middle East's sole if undeclared nuclear power, and many others in the West suspect Iran is trying to develop atomic weapons under the guise of its nuclear program, a charge Tehran denies.