Over 900 injured by blasts as meteor falls in Russia

A meteor streaked across the sky above Russia's Ural Mountains on Friday morning, causing sharp explosions and injuring more than 900 people, many of them hurt by broken glass.

"There was panic. People had no idea what was happening. Everyone was going around to people's houses to check if they were okay," said Sergey Hametov, a resident of Chelyabinsk, about 1500 kilometers (930 miles) east of Moscow, the biggest city in the affected region.

"We saw a big burst of light then went outside to see what it was and we heard a really loud thundering sound," he told The Associated Press by telephone.

One of the locations to sustain damage was the local synagogue. Chabad Rabbi Yechiel Lotan recounted the event: "I was at home when all of a sudden there was a massive flash of light followed by a huge explosion. I've never heard anything like that before."

"I ran to the window and saw a huge ball of fire in the air. I immediately called the synagogue and the people attending the morning prayer service told me that all the windows virtually exploded. Thank God no one was hurt."

Another Chelyabinsk resident, Valya Kazakov, said some elderly women in his neighborhood started crying out that the world was ending.

Some meteorites, which are fragments of the meteor, fell in a reservoir outside the town of Cherbakul, the regional governor's office said, according to the ITAR-Tass news agency. It was not immediately clear if any people were struck by fragments.

Meteors typically cause sizeable sonic booms when they enter the atmosphere because they are traveling much faster than the speed of sound. Injuries on the scale reported Friday, however, are extraordinarily rare.

Interior Ministry spokesman Vadim Kolesnikov said more than 400 people had sought medical treatment after the blasts, and at least three had been hospitalized in serious condition. Many of the injuries were from glass broken by the explosions.

Kolesnikov also said about 600 square meters (6000 square feet) of a roof at a zinc factory had collapsed. There was no immediate clarification of whether the collapse was caused by meteorites or by a shock wave from one of the explosions.

Reports conflicted on what exactly happened in the clear skies. A spokeswoman for the Emergency Ministry, Irina Rossius, told The Associated Press that there was a meteor shower, but another ministry spokeswoman, Elena Smirnikh, was quoted by the Interfax news agency as saying it was a single meteor. 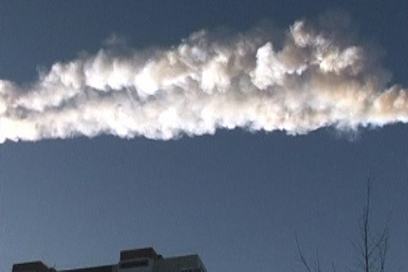 Amateur video broadcast on Russian television showed an object speeding across the sky about 9:20 am local time (0320 GMT), leaving a thick white contrail and an intense flash.

Russian news reports noted that the meteor hit less than a day before the asteroid 2012 DA14 is to make the closest recorded pass of an asteroid - about 17,150 miles (28,000 kilometers).

The dramatic events prompted an array of reactions from prominent Russian political figures. Prime Minister Dmitry Medvedev, speaking at an economic forum in the Siberian city of Krasnoyarsk, said the meteor could be a symbol for the forum, showing that "not only the economy is vulnerable, but the whole planet."

Vladimir Zhirinovsky, the nationalist leader noted for vehement statements, said "It's not meteors falling, it's the test of a new weapon by the Americans," the RIA Novosti news agency reported.

The phenomenon has also been observed in Kazakhstan.

The meteor shower came hours before the close encounter with 50m-wide asteroid 2012 DA14, which will pass just 34,000 kilometers from Earth tomorrow.

The asteroid would leave a crater up to one kilometer wide if it hit Earth.