King: Jordan ready to fight any threat from Syrian conflict

Speaking to military cadets about Syrian war as Jordanian, US forces proceed with joint exercises, King Abdullah says 'if the world does not help as it should, we are able to take measures to protect country'

Jordan's King Abdullah said on Sunday the kingdom was ready to fight to protect itself against any threat to its security from the escalating civil war in neighboring Syria.

He was speaking as Jordanian and US forces proceeded with joint military exercises with the participation of 17 other countries. Diplomats say the exercises, which entered their second week, aim to send a strong message to Syrian President Bashar Assad.

"If the world does not help as it should, and if the matter becomes a danger to our country, we are able at any moment to take the measures to protect the country and the interest of our people," King Abdullah told military cadets at a graduation ceremony in southern Jordan. 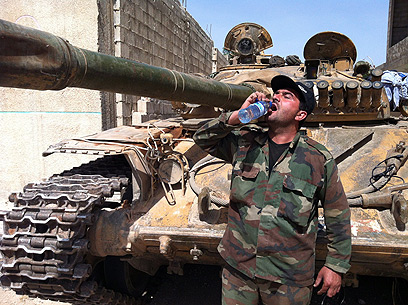 He also saluted members of his country's armed forces who helped over the last year undertake a massive humanitarian relief operation to bring across the border hundreds of thousands of Syrian refugees fleeing bombardment in their villages and towns and seeking a safe haven.

A Pentagon spokesman said on Saturday Defense Secretary Chuck Hagel has approved a Jordanian request for American F-16s and Patriot missiles to remain in the Western-backed kingdom after the end of the military maneuvers.

The decision to put Patriot batteries - an air and missile defense system - in Jordan has particularly angered Russia, Assad's main international ally, which accuses the West of fanning the conflict in Syria.