Calls to build refugee camps on Syrian side of border. Tourism minister: 'Imagine you have 50 million Mexicans coming to the US. We cannot cope'

As the United Nations reported that the number of refugees that have fled from Syria has passed the two million mark -- more than half of them children -- neighboring Lebanon is struggling to absorb the hundreds of thousands of who have sought safety across the nearest border.

Officially, the number of Syrian refugees in Lebanon is 716,000, but Lebanese officials say the real number is more than a million, while the total population in Lebanon is just over 4 million. As Syria braces for a possible US strike over its apparent use of chemical weapons, the flow of refugees is increasing daily.

“I’m very concerned,” Lebanese tourism minister Fady Aboud told The Media Line. “Imagine you have 50 million Mexicans coming to the US. We cannot cope. You cannot welcome people and then not provide them with a tent or medicine or any services.”

Jordan, which now houses more than 500,000 refugees from Syria; and Turkey, with 460,000 more are also struggling to cope. But it is Lebanon, with the smallest population and growing sectarian tensions, that is suffering the most. Thousands of members of Hezbollah, an Iranian-aligned group listed by the American State Department as a terrorist organization yet which is part of the Lebanese government, have been fighting in Syria alongside army troops loyal to the regime of President Bashar Assad, where their casualty toll continues to rise. Violence from the fighting in Syria has periodically spilled over into Lebanon, which has a significant Christian minority. Several Lebanese officials have suggested that the United Nations establish refugee camps on the Syrian side of the border to contain the flood of those seeking safe haven. “It’s not human to allow them to enter Lebanon when we cannot provide them with shelter,” Aboud said. “We receive less than 20 percent of the money that Jordan receives and we have many more refugees.” 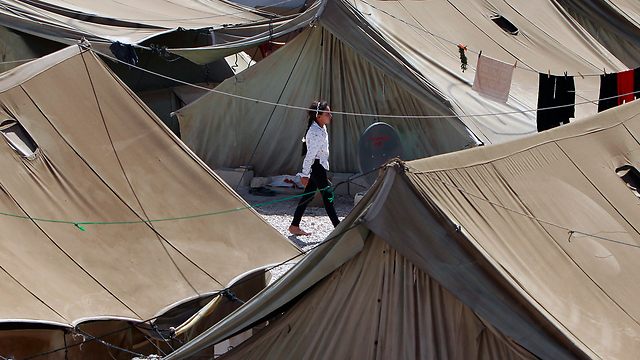 Lebanese analysts say there has been a sharp increase in crime since the civil war began next door, especially in areas where there are a lot of refugees.

“They are living in a very bad situation,” Farid Chedid of Lebanon Wire told The Media Line. “While some of them have been received by relatives, some are begging or sleeping under bridges. Others are prostitutes. Everyone says ‘enough, we can’t take any more refugees,’ but some say it loudly and others won’t say it out loud.” Tourism Minister Aboud says 22% of Lebanon’s prison population today is comprised of Syrian nationals. The flood of refugees also threatens to undermine Lebanon’s delicate demographic balance. About 40% of the population is Christian, while Sunni Muslims constitute about 27% and Shiites another 27%. All of the refugees are Sunni. The Lebanese government collapsed last March and since then the cabinet has served in a caretaker role. That has made it more complicated and difficult for the government to make decisions on refugees. While most refugees from Syria continue to be allowed into Lebanon for humanitarian reasons, authorities have cracked down on the number of Palestinians being allowed into Lebanon. Human Rights Watch says that since last month, Palestinians refugees are being denied entry into Lebanon. There are already 455,000 Palestinians in Lebanon, many living in overcrowded refugee camps that have been the scene of frequent clashes. According to UNRWA, the United Nations agency for Palestinian refugees, some 92,000 Palestinian refugees from Syria have already sought refuge in Lebanon during the current crisis. A senior Palestinian official in Lebanon confirmed to The Media Line that there have been fewer Palestinian refugees allowed into Lebanon. But he said it was for practical considerations only. "Amid the increase in the number of refugees in Lebanon, the authorities made new regulations to help specify the real refugees,” he told The Media Line. “If a person is going to a hospital or running away from the war, they are always allowed in. They require a rental contract from those coming in to make sure that they are real refugees." The official explained that some people are considered to be refugees even as they travel back-and-forth between Syria and Lebanon. Some come to Lebanon on weekends and return to Syria on the weekdays. He argues that it is not correct to afford refugee status to those who stay in Lebanon but travel to Syria periodically to check on their homes there. As President Obama waits for Congress to approve a possible strike on Syria next week, the flood of refugees is expected to increase further. Lebanese officials say that while they are sympathetic, they have simply reached the limit of their capacity to help. Article written by Linda Gradstein