Kerry: US still waiting for Russia plan on Syria

US secretary of state says 'If we choose not to act, we will be sending a message to Iran of... American weakness.' Russian proposal to disarm Assad of chemical weapons is taken to UN Security Council

Secretary of State John Kerry said Tuesday that the US was still awaiting a proposal from the Russians about how Syria could agree to give up its chemical weapons, but that the US will not wait for long.

Kerry told a House panel on Tuesday that the Obama administration will give any proposal a hard look, but that it must not be used as a delaying tactic and that it has to be verifiable, real and include tangible conditions for Syrian President Bashar Assad to forfeit his chemical weapons.

Kerry was testifying in the House to persuade members of the Armed Services Committee to back Obama's request for military action against Syria – a strike that could be avoided if Syria gave up its weapons. 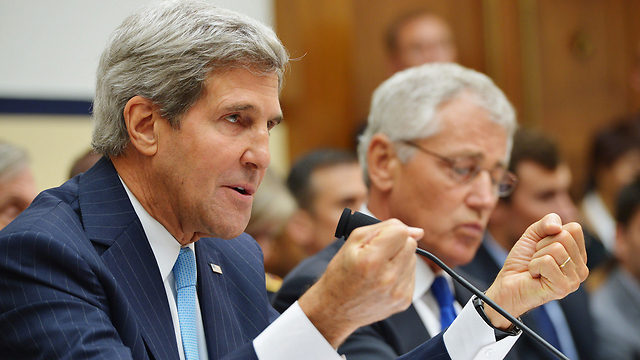 The secretary of state added he was holding discussions with Prime Minister Benjamin Netanyahu about the dangers revolving around Syria's possession of chemical weapons and about the fact that there aren't enough ABC masks in Israel, to defend citizens in case a chemical attack takes place.

"In Israel, they can’t get enough gas masks. And there’s a reason that the Prime Minister has said this matters, this decision matters. It’s called Iran. Iran looms out there with its potential – with its nuclear program and the challenge we have been facing. And that moment is coming closer in terms of a decision. They’re watching what we do here. They’re watching what you do and whether or not this means something," Kerry said.

He noted that "If we choose not to act, we will be sending a message to Iran of American ambivalence, American weakness. It will raise the question – I’ve heard this question. As Secretary of State as I meet with people and they ask us about sort of our long-term interests and the future with respect to Iran, they’ve asked me many times, 'Do you really mean what you say? Are you really going to do something?'"

White House spokesman Jay Carney acknowledged potential progress. "Before this morning, the Syrian government had never even acknowledged they possessed chemical weapons. Now they have," Carney said on MSNBC.

President Barack Obama is going to Congress on Tuesday with fresh hopes of a diplomatic breakthrough that would allow Syria's government to avoid US missile strikes if it surrenders its chemical weapons arsenal. He will address the nation from the White House on Tuesday night.

A White House official said Obama has agreed to discussions at the UN Security Council on the proposal from Russia, Syria's closest ally, to secure that country's chemical weapons stockpiles.

The official said Obama discussed the proposal Tuesday with French President Francois Hollande and British Prime Minister David Cameron. The official requested anonymity because the official was not authorized to discuss the private conversations by name.

Obama had planned to use his meetings with lawmakers to lobby for targeted strikes against Syrian President Bashar Assad's forces in retaliation for last month's deadly chemical weapons attack outside Damascus. Instead, he signaled in several interviews Monday evening that surprising new diplomacy could eliminate the risks of another chemical attack without US intervention. 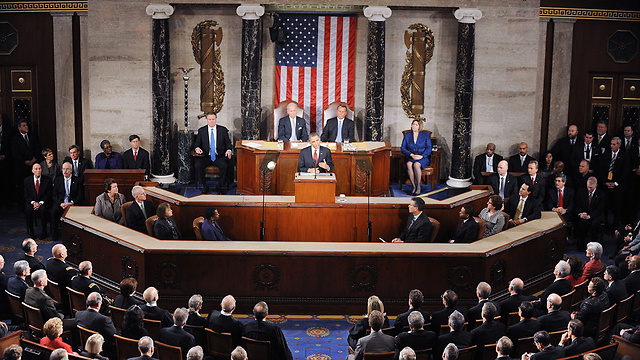 US Congress (archives) (Photo: MCT)
Syria's foreign minister on Tuesday said the country has accepted Russia's proposal to place its chemical weapons under international control for dismantling. The proposal emerged Monday after a comment from Secretary of State John Kerry was taken up by Russia, and the United Nations expressed support.

A group of senators on Tuesday prepared a resolution calling for a UN team to remove Syria's chemical weapons by a set deadline and allowing US military action if that doesn't happen. Congressional aides spoke on condition of anonymity because they weren't authorized to publicly discuss it.

Obama on Monday told CBS, "The key is, to paraphrase Ronald Reagan, that we don't just trust, but we also verify. The importance is to make sure that the international community has confidence that these chemical weapons are under control, that they are not being used, that potentially they are removed from Syria and that they are destroyed." The Obama administration blames Assad for an August 21 chemical weapons attack and says more than 1,400 people were killed. The first vote in Congress on authorizing the use of military force had been expected Wednesday, but that has been delayed. All sides, including Russia, seemed to welcome the chance to try another solution. Russian Foreign Minister Sergey Lavrov said Tuesday that his country was working with Syria to prepare a detailed plan of action. Lavrov said Russia will then be ready to finalize the plan with UN Secretary General Ban Ki-moon and the Organization for the Prohibition of Chemical Weapons. France's foreign minister said France will offer a resolution in the UN Security Council aimed at forcing Syria to make public its chemical weapons program, place it under international control and dismantle it. Western officials are still cautious about possible stalling tactics by Assad's regime in Syria, where more than 100,000 people have died in more than two years of civil war. In his interviews, Obama declined to say what he would do if lawmakers rejected his proposal for limited military strikes. The original resolution in the Senate would authorize limited military strikes for up to 90 days and forbids US ground troops in Syria for combat operations. Several Democrats and Republicans announced their opposition Monday. Sixty-one percent of Americans want Congress to vote against authorization of military strikes in Syria, according to an Associated Press poll. The poll, taken Sept. 6-8, had a margin of error of plus or minus 3.7 percentage points. Sen. John McCain, among Congress' most outspoken advocates of American intervention in Syria, said he was skeptical of Russia's intentions.

"But to not test it would also be a mistake," he said.