The Nobel Prize was granted to two American-Israelis, Arieh Warshel and Michael Levitt, only several days after Taub Center for Social Policy Studies in Israel published a worrying study that sets Israel as a world leader in academic emigration.

"Conducting research in Israel is difficult," explains Koby Levy, a scientist in the Department of Computational Molecular Biophysics in the Weizmann Institute and a colleague of the Nobel laureates.

"Israel is not the main arena of science. People here are very good and think well, but in terms of science we're on the periphery of the world. Budgets here are very limited. A lot of Israelis build on funds from Europe, and we live off research grants.

"I never thought of transferring abroad. No. The roots here are above everything. But I can safely say I absolutely feel how pressed we are. There are a lot of projects I want to pursue but I just can't. It forces me to focus on humble research."

One third of researches go abroad

According to the National Committee for Research and Development in the Science Ministry, in 2011, 5% of Israeli academics have been staying abroad for three years or longer. The rate of academics staying abroad is particularly high amongst PhD students (10.5%) and MSc holders (7.2%). The rate of first and second degree holders who are abroad is 4.8% and 4.2% respectively.

The occurrence is especially high among holders of doctorate degrees in the fields of science and engineering, almost four times as many as those who hold degrees in social and liberal sciences. Also, the rate of researchers staying abroad is larger among university graduates than among college graduates (5.8% as opposed to 3.4%). From within the universities, the highest rate of researchers abroad is among graduates of the Weizmann Institute (17.8%), followed by the Technion (9%), Hebrew University of Jerusalem (7.1%), Tel Aviv University (6.9%), Ben Gurion University (4.3%) and Bar-Ilan University (2.9%.)

Executive director of the Taub Center, Dan Ben-David, who is also an economist in Tel Aviv University, said that in order to keep academics in Israel, they have to be provided with proper pay and decent lab condition. "By the '70s they built seven research universities, and since then not even one, excluding Ariel, which has a political debate around it," he said. "Out national ability to fund higher education, to build universities, and to pay wages that will keep people here, is wearing off." 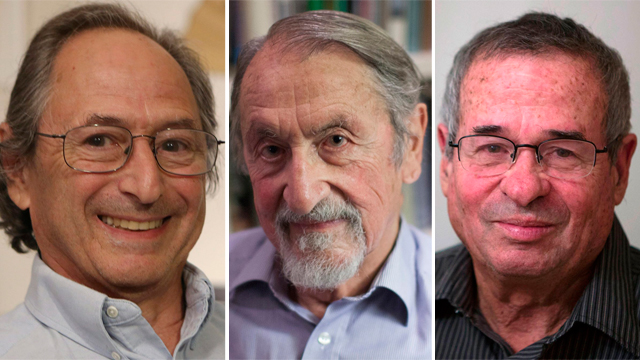 Levitt, Karplus, Warshel (Photo: Reuters)
Professor Ben-David's frustration is mainly over what seems to be plain wasted potential: "The ability of people in Israel is just fantastic. Graduates of ours are accepted to the most sought-after institutes in the world. It's what every country hopes to gain, but we can't hold on to them." Ehud Keinan, chairman of the Education Ministry's advisory panel on chemistry, shares the frustration. He also personally knows the winners, as well as the third winner Martin Karplus. "We deserve a Nobel Prize in brain drain," he said bitterly. "I'm happy for them; all three of them are my friends, but I'd be happier if there was hope. I think we're just getting worse. I'm an optimist by nature, but the brain drain here in Israel is clear. The conclusion is that our country is less and less suitable for scientific research."
Brain Drain
Nobel laureate: We left because Warshel didn't get tenure in Israel
Yitzhak Benhorin
Chemistry prize winner Michael Levitt recalls route to scientific breakthrough, illustrating Israel's brain-drain problem in matter-of-fact terms
Nobel laureate: We left because Warshel didn't get tenure in Israel
Professor Keinan defines the data published by the Taub Center as "frightening", because "when a third of researchers choose to leave their own country, it hints at the priority the country gives higher education. There are no jobs in Israel. They don't give you a chance to work, and people vote with their feet. My daughter, for example, is a professor at Harvard."

The fact Warshel and Levitt live and work in the US is not even news in the eyes of professor Keinan. He recalled that former Israel Noble Laureates – Ada Yonath and Dan Shechtman – did most of their award winning work outside the country and said if they weren't patriotic, he believes, they wouldn't be living in Israel either. 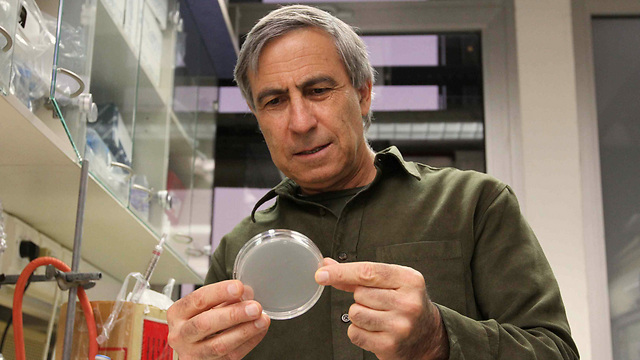 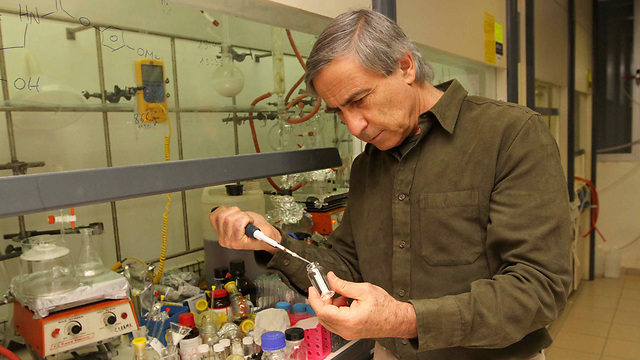 Professor Ehud Keinan (Photo: Ido Erez)
"In 1993 they offered me a job in the US with a paycheck ten times as much as I got in Israel, with budgets for research and labs," he said, "and I said no, and they told me I was insane. I told them I'm a scientist and it's very important for me to do science, but I have six kids and I don't want them to grow up American. Very few people consider things this way."

Since February of 2009, Dr. Niv Ad has been the head of Cardiology in Inova Hospital in Washington. The hospital is known for its specialty in heart and vascular diseases and is considered one of the best in the world. VIPs from Washington and businessmen from all around the world come to Dr. Ad to undergo heart treatments. Every now and then he flies to a remote destination in the world – even Israel – to treat patients, and then goes back to his department. Among his most famous patients one could count former US vice president Dick Cheney, who was transplanted with an artificial heart. To those who want to understand why young talented minds are not in Israel, Dr. Ad is a perfect example. 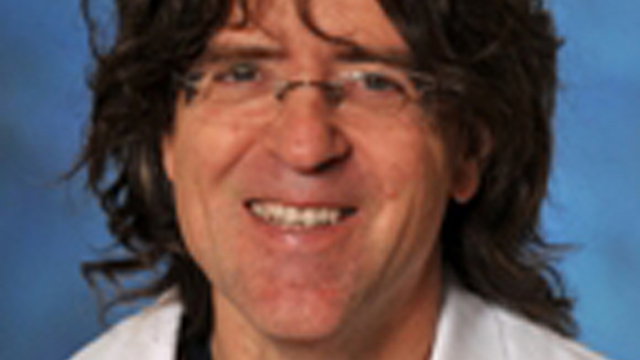 Dr. Niv Ad
"After medical school in Israel I took a two-year fellowship in Georgetown University in Washington," he told Ynet. "Right after that I got an offer to be head of Cardiology, but my wife was in the senior staff of Tel Aviv University, and I gave up the offer. In 2002 we came back to Israel, and I worked as a senior doctor in cardiology in Hadassah Ein Kerem Hospital in Jerusalem. It was a great department then." Dr. Ad was in his 40s at the time and with high professional ambition. "Money was never the problem, but I felt like I wasn't professionally advancing at the rate I wanted. I brought new things to Israel; I published a lot, I was invited to lecture in the most important forums in the world, and I felt like I wasn't pushing forward. In the meantime offers poured from the US. I wasn't looking for them; they found me. I got offers from the West Coast, from Ohio, St. Louis and from Washington, which I chose, and I managed to start a center where, in the field I work in, I'm considered the best in the world." Dr. Ad leaving caused two others great brains to "drain" – his wife, who is now a senior in Maryland University, and his son, who his finishing his doctorate studies at UC Berkeley.

"There were talks trying to get me back, but it fell through. Not over my paycheck – which at any rate they can't pay in Israel – but over the principles: where do we want the ward to go? How can we gain resources that will compete in the world in terms of research and development? I never felt like there was an intention to even get the resources, even though Israel is not a poor country."

When asked about the source of the problem, Dr. Ad said, "the level of doctors in Israel is one of the highest in the world, but systematically, Israel isn't set to give young talented doctors the opportunities they need. The pay gaps force senior doctors to fight for their status and that blocks the way for young doctors to advance. The worry is to maintain and not improve. We have to let the young and bright lead forward because they have the ideas. That's not what's happening. It didn't happen in my case, either."