Putin instead of Obama: Russian foothold in Cairo

Head of Russian intelligence lands in Cairo, defense minister will follow in what seems as policy to fill in vacuum left by Obama admin after US aid freeze

Russia's military intelligence chief Viackeslav Kondraskou landed in Cairo this week for a few days' visit, as Egypt attempts to raise funds following the freezing the American aid. The unconcealed purpose for the visit was to discuss with senior Egyptian security officials, including Defense Minister Abdel Fattah al-Sisi and Chief of Staff Sedki Sobhi, the military and security cooperation between the two countries.

The visit seized much attention by Egyptian and Arab media, which tried to prove that it is no ordinary event. Al-Arabiya network, for example, prepared a piece titled "The visit of the Russian intelligence chief to Egypt confuses Washington." The reference to the US stems from the recent White House decision to halt US military aid to Egypt following violent events in the country since the military coup and the overthrow of former Egyptian President Mohamed Morsi.

"The meaning of the visit is not an abandonment of the close ties with Western countries," a source in Cairo said, trying to ease tensions. However some of the details revealed by Arab media show that Egypt is at least seeking additional funding sources due the economic crisis in the country, which of course cannot be separated from the freezing of aid. Some suggest that the actions are no less than a search for an alternative to the American financial support. 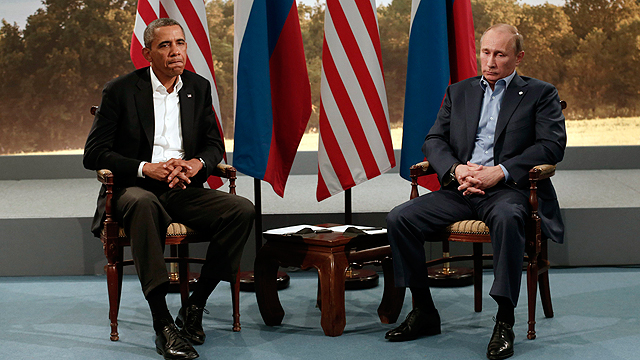 Obama, Putin at G8 Summit (Photo: Reuters)
The Foreign Ministry in Cairo has hardened its position on the matter in recent weeks. As the American decision was made, a spokesperson for the Egyptian Foreign Minister said that they will not surrender to American pressure and that the move is wrongful. Egypt's Foreign Minister Nabil Fahmy spoke even more bluntly than his spokesman and did not hesitate to clarify in an interview to CNN that his country will not wait empty-handed for the American funds: "There will be an address to our national security needs. There is an answer to a large amount of those needs by the United States, but if these needs will not be met, we will seek other sources." Russia certainly may be part of those "other sources." Some claim the senior Russian intelligence delegation has already expressed its commitment to the Egyptians to support them with every mean in order to aid the fight against terror in the Sinai Peninsula. Egyptian sources quoted by the Lebanese channel Al-Akhbar said that the talks between the sides dealt, among other things, with fighting against espionage activity, electronic terror, radical religious organization and even the supply of explosives detection. The same sources in Cairo claimed that it is possible that after the intelligence chiefs the Russian defense minister may also make a visit to the Egyptian capital to discuss a series of important issues, and to stress the Kremlin's support of the Egyptians. Meanwhile, a meeting between Egypt's armament chief and the Russian military intelligence chief was set up in order to discuss, inter alia, arms deals, the expansion of military cooperation and opening of Russian markets to the Egyptians. The rapprochement between Moscow and Cairo, at least as it seems in the media arena, is consistent with the policy promoted by Russia's President Vladimir Putin to better re-position his country within the Middle East through expanding Russia's influence on the region's countries. The Egyptian side, even under previous regimes, attempted to find diversity in its funding sources – besides the US – in order to signal to the Americans that they are not alone in the field.

Yet it would be premature to bring an end to the relations between the US and Egypt. While the Russian security delegation was hosted, Egypt's defense minister made time to speak to his American counterpart Chuch Hagel. According to the Pentagon, the two spoke about the progress of the roadmap in Egypt, the lifting of curfew and termination of emergency state in the country. The US government statement stressed the importance of continued relations between the countries.