As part of string of unconfirmed technological announcements, Islamic Republic claims to have manufactured new unmanned aircraft, capable of traveling as far as Israel, staying in air for up to 30 hours

Iran has unveiled a new aircraft that it says is the biggest drone yet to be developed in the Islamic Republic, capable of staying aloft for up to 30 hours.

Defense Minister Hossein Dehghan says the reconnaissance and combat drone Fotros has a range of 2,000 kilometers (1,250 miles). That would cover much of the Middle East including Israel. 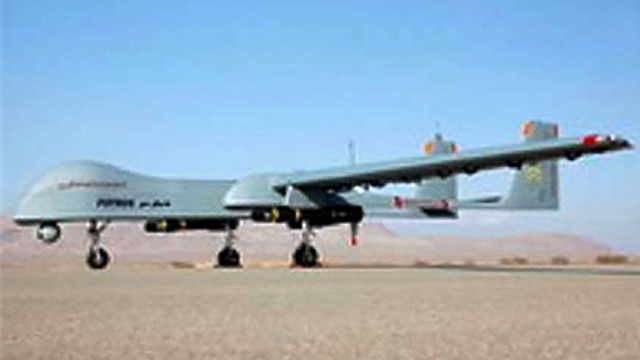 "The Fotros drone has an operational range of 2,000 kilometers and can fly at an altitude of 25,000 feet, with a flight time of 16 to 30 hours," Dehgan was quoted as saying, adding the new drone could carry out reconnaissance missions or launch air-to-surface missile strikes.

The aircraft was tested "successfully" and "shows that sanctions imposed by the enemies are not an obstacle to the progress of the defense industry," the minister told the unveiling ceremony.

Only two months ago Iran announced it had developed a new RQ-170 drone, equipped with a special mechanism that makes it undetectable to radars.

Brigadier General Amir Ali Hajizadeh, chief of the Revolutionary Guard Corps' airspace division, said that the new drone was manufactured under the supervision of government officials.

According to Hajizadeh, the aircraft's capability to stay undetected is attributed to its ability to adapt its heat production to the temperatures of its surroundings, and to its ability to produce very little sound. Iran has been working to develop dozens of drones of a similar model, Hajizadeh noted, adding that the Islamic Republic was in the possession of several unmanned aircraft that are capable of reaching Israel, most specifically the Shahed 129 that can reach Tel Aviv. The commander added that Iran was in the possession of the technology to manufacture intercontinental ballistic missiles, but that "our enemies are close and we have no need to make great efforts to reach them." In December 2011, Iran announced that its armed forced had shot down a US RQ-170 reconnaissance drone in eastern Iran.

Following the incident, Iran's Al Alam state television network quoted an unnamed source saying: "The Iranian military's response to the American spy drone's violation of our airspace will not be limited to Iran's borders any more."