The asylum seekers' march on Thursday from the Holot detention facility towards Beersheba led to much criticism within the political arena. "The Immigration Authority is violating the bill initiated by the government, since if the facility is open – it can be exited and walked to Beersheba from," claimed Knesset Member Dov Khenin. "Their behavior (Thursday) only proves what we have said all along – the government initiated a new prison under a euphemistic name." According to the new amendment to the Infiltration Prevention Bill, which was approved by the Knesset last week, the Population and Immigration Authority is authorized to detain an asylum seeker if the latter left the detention facility and did not return after 48 hours. However, if the incident is a second violation of the law or detention terms, the detainee can be arrested before 48 hours have passed.

In the latest march, 130 asylum seekers left the detention facility, and according to the last head-count, dozens have yet to return, and it is estimated that several have escaped and others are being held by Immigration Authority inspectors. The detainees will undergo a hearing, though among those who left are some who have left the facility for the first time, so it is unclear why they were arrested and on what grounds. Human rights activists who were present on site claimed the arrests were made using excess force. The Immigration Authority said in response that the inspectors acted within the boundaries of the law.
Asylum seekers march, Thursday (Video: Roee Idan)    (צילום: רועי עידן)
X

In recent days, the Interior Ministry and Immigration Authority slammed Knesset Members and human rights activists who aided the Holot detainees who left the facility this week. They claimed the aides are breaking the law by guiding the asylum seekers' march. However, neither the Interior Ministry nor the Immigration Authority responded to Ynet's questions as to why no police complaints have been filed against those accused of violating the law. Thursday morning, Tel Aviv Deputy Mayor Arnon Giladi demanded to revoke the immunity of MKs Ilan Ghilon, Michal Rozin and Hanin Zoabi who took part in the asylum seeker's protest in Jerusalem on Monday. 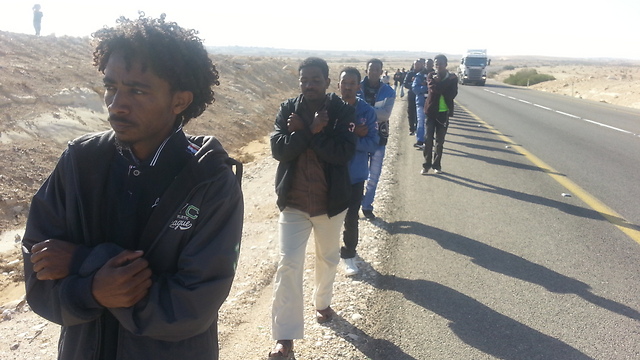 Asylum seekers march, Thursday (Photo: Roee Idan)
He sent a letter addressing the matter to the attorney general and claimed that "the personal aid by the MKs to the infiltrators who abandoned the detention facility is a flagrant violation of the criminal law and a cynical defiance against the existence of the State of Israel as a democratic state."

The recent events have led to much criticism among opposition members, who pointed their finger at Interior Minister Gideon Sa'ar. According to them, the flaw to the law lies within the amendment, and the results were predictable.

"The interior minister led an accelerated legislation with obvious flaws – we shouted and warned within the little time we had, but to no avail," said MK Michal Rozin of Meretz. "You can't lie to the citizens that the country is taking care of the issue of asylum seekers with this unnecessary and wasteful law, or through false hope of a 'third country'." Rozin was joined by MK Khenin, who claims that as long as there is no real solution to the issue of asylum seekers, they should be dispersed across the country and be allowed to work. "I call on the interior minister to reexamine the law that was approved by the Knesset on the basis of what happened since it was approved," Khenin said. "Like in every jail – when the gate is open people come out, certainly when they have nothing to do within the prison. What we need is another policy that treats Eritreans and Sudanese as human beings." On the other opinions end was MK Miri Regev (Likud), who said the images coming from Holot are photo-ops. "We need to stop this marching carnival, which is orchestrated by leftist organization and irresponsible MKs," Regev said. "Any flagrant violation made by the infiltrators will be received with zero tolerance by the police, whom operate under Israeli Knesset laws." In response to the allegations against Minister Sa'ar, sources within the Interior Ministry told Ynet: "These are Knesset Members who violated the law, and afterwards sponsored infiltrators who broke the law as well. Their conduct speaks for itself."

The Population and Immigration Authority said in response to recent events: "Unfortunately, repeatedly, the infiltrators in the open facility chose to break the reporting order, when they are led, once again, by human right representatives. Any attempt for dialogue on our part and request to retune to the facility were unsuccessful.

"Most of the infiltrators who were detained were returned this week to the (Holot) facility after they warned not to violate instructions again. The infiltrators will under a hearing. The law allows transfer of custody for a period of up to 30 days to those who repeatedly violate the law. Those who broke orders for the first time will undergo disciplinary measures within the Holot facility."