Harper: Canada supports Israel because it is right to do so

Harper stresses Canada's strong bond with Israel, saying 'Israel’s right to exist as a Jewish state is absolute and non-negotiable', apologizes for Nazi-era negligence, denounces boycotts of Jewish State – and is heckled by Arab parliamentarians

Canadian Prime Minister Stephen Harper addressed the Knesset on Monday as part of his four-day visit to Israel and the West Bank. He became the first Canadian leader to address the Israeli government.

In a speech full of praise for the Jewish State, Harper emphasized the strong ties between the two countries, even mentioning the Canadian army's use of Israeli technologies in Afghanistan. 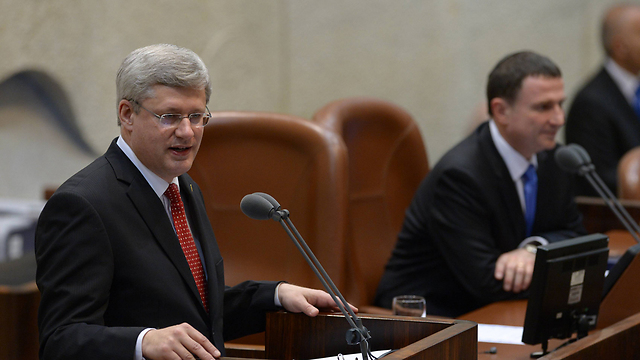 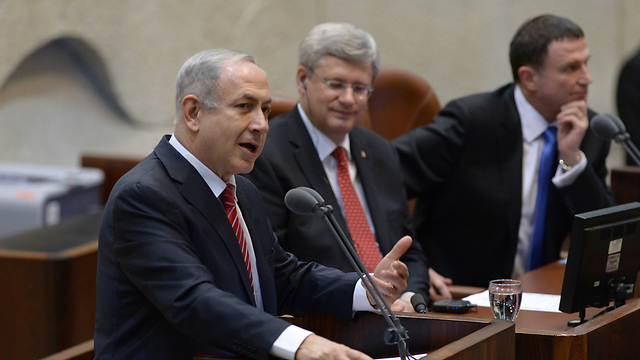 Before the Canadian leader's address, Prime Minister Benjamin Netanyahu gave a short speech highlighting the unique position Harper enjoys as a supporter of Israel in the international community, saying: "There are those who try to deny our connection to Jerusalem and our land. Not you. You know these facts well. There are others in the international community who know these facts as well, but the difference, Stephen, is that you have the courage to speak the truth."

Netanyahu, who was heckled at times, criticized the international hypocrisy that characterizes discourse of Israel versus the Arab world. He said: "In an age of hypocrisy there are those who choose to point the finger at Israel, the only democracy in the region that respects human rights, maintains the rule of law, and guarantees the freedom of worship to any and all faiths."

He told Harper, "Canada under your leadership is a moral compass and a beacon of candor. You fight against the attempts to deprive Israel of its legitimacy and you stand by us in the war on terror."

In a well-received speech, the Canadian prime minister reiterated his government's position that "Israel’s right to exist as a Jewish state is absolute and non-negotiable" – a position many in the government see as a precondition for the successful resolution of the Israeli-Palestinian conflict.

Harper apologized for the Canadian government's refusal to help Jewish refugees fleeing Nazi Germany. While condemning calls in the international community to boycott the Jewish State, Harper was given a taste of Israel's rough-and-tumble parliament as he was heckled by Arab lawmakers. Lawmaker Ahmad Tibi screamed "settlements," while a second lawmaker, Talab Abu Arar, then shouted and stormed out of the hall. After the outburst, Harper received a standing ovation from other parliamentarians. Noting that the activists and organizations who most vocally criticize Israel rarely give equal attention to the other cases of human rights abuses across the world, Harper warned that "in the garden of such moral relativism, the seeds of much more sinister notions can be easily planted." He added, "As once Jewish businesses were boycotted, some civil-society leaders today call for a boycott of Israel." 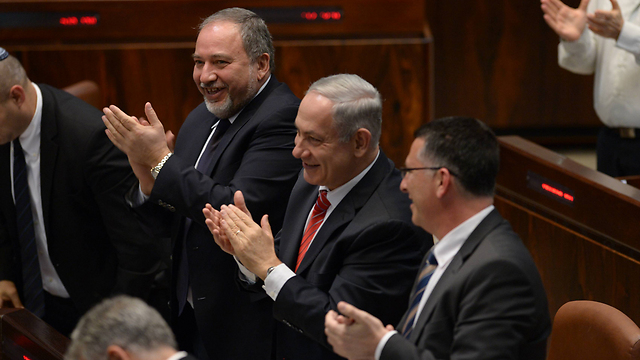 Lieberman and Netanyahu applaud the Canadian PM's speech (Photo: Amos Ben Gershom, GPO)
The Canadian prime minister also addressed another of Israel's threats – the Iranian nuclear program. He expressed hope that the diplomatic process would succeed, but emphasized that Canada would not rush to lift its sanctions. He assured the Israeli legislators that, "For now Canada's own sanctions will remain fully in place."

Before leaving the podium to a standing ovation, Harper reiterated the strategic message of his speech: "Through fire and water, Canada will stand with you."