Economy minister and Habayit Hayehudi leader says in INSS speech that history will not forgive Israeli leaders who cede any land, all Israelis under future Palestinian rule will be murdered

Economy Minister Naftali Bennett lashed out on Tuesday at Israel's ongoing peace talks with the Palestinians, warning that negotiations inevitably lead to violence against Israelis.

"Between 2000 and 2003 more than one thousand Israelis were murdered on the streets of Haifa, Tel Aviv and Jerusalem in suicide attacks that followed immediately after Camp David, when (then) Prime Minister Ehud Barak wanted to give them more than anyone else had before," Bennett told the audience at the annual defense conference of the Institute for National Security Studies (INSS).

"2012 was the quietest year since there were no political negotiations," he said. "No one died that year in any attacks in Jerusalem or Judea and Samaria. As usual we can say, since the peace talks began, an intifada came about." 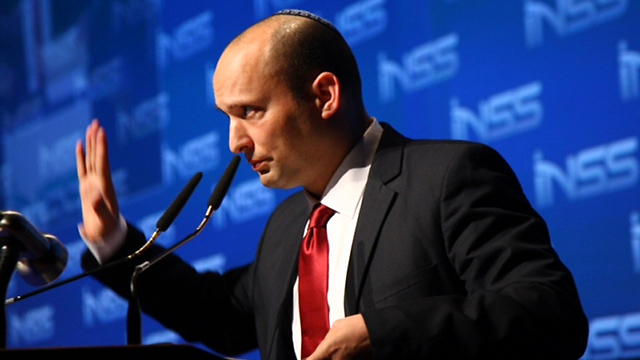 Bennett passionately dismissed the chances of achieving true peace with a two-state solution. Referring to recent statements made by both sides in regards to having Israeli citizens living under a possible Palestinian rule, he said: "You know why Israelis can't live under Palestinians? Because they'll be killed. How do I know this? Because it has already happened. One day, one morning, our neighbors woke up and killed us."

"If an Arab citizen walked into Herzliya, he would walk out safe and sound, as he should; if an Israeli walked in to Ramallah he'd be murdered. Everyone here knows it. So why can't it be that the Palestinians would rule Israelis? Because they'll kill them."

The minister also warned that a Palestinian state would not welcome the millions of refugees dotted around the Arab world, and would instead direct them to Israel.

"A Palestinian state will overflow the State of Israel with refugees. Millions of Palestinian refugees - you think their brothers in Nablus will want to share their land with them? You think? They'll send them straight to Israel!" he said.

He also had harsh words for anyone willing to cede land as part of a peace deal.

"The western area of Israel is not just a territory; it is the Land of Israel," Bennett said, referring to the West Bank. "It was ours 4,000 years ago and it will continue to be ours for the next 4,000.

"We must live the legacy of our people, the history of our people and the root of our lives. We need to understand this is our rare opportunity to be the gatekeepers of the Jewish legacy, the keepers of Jerusalem. Our descendants will not forgive an Israeli leader who would split our country and give away our capital."

Bennett, who a short time earlier had returned from a day-long trip to Poland for a Holocaust memorial ceremony at Auschwitz, also raised the question of why the Nazi death camp had not been bombed by the Allies during World War II.