Four people were killed and 11 others were wounded Sunday when a tourist was hit by an explosion in the Sinai Peninsula, close to the Taba border crossing with Israel.

Three of the victims were South Korean tourists, and the fourth was an Egyptian bus driver, Egyptian security officials said.


The officials said the source of the explosion was not clear, but they believe it was either a car bomb or a roadside bomb that was detonated by remote control. The Ansar Beit al-Maqdis terrorist group reportedly took responsibility for the blast.

Officials said the bus was carrying 33 South Korean tourists and had arrived at Taba from the ancient Greek Orthodox St. Catherine's monastery in central Sinai. In Seoul, the foreign ministry said in a text message that 31 passengers were from a church in Jincheon, in the country's Choongbuk Province, being led by a South Korean tour guide.
The wounded were treated in hospitals in Egypt, and across the border in the Israeli port city of Eilat, said the officials. Five of the passengers who were seriously wounded in the blast were being transferred for treatment at Yoseftal Hospital in Eilat.
However, Egyptian paper Al Youm Al Saab reported that Egypt refused to allow Israeli ambulances to enter the crossing to evacuate the Koreans. 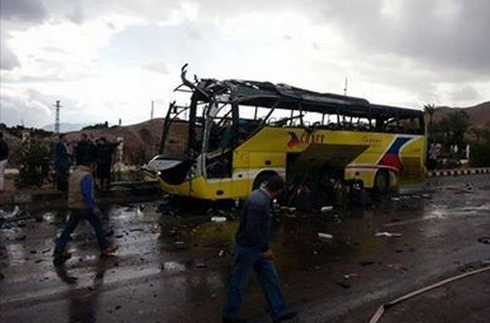 Egyptian security forces moved quickly to seal off all entry and exit points from Taba border in an attempt to catch the perpetrators.

"There is a small smoke cloud near the (border) fence, about 50 meters south of the border crossing," an eye witness said in the immediate aftermath of the blast. 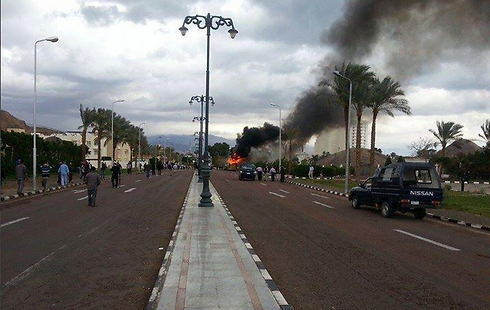 Emergency responders rushed to the scene of the explosion. Israeli police said they were preparing medics to treat any casualties from the explosion. On the Israeli side of the border, a fleet of ambulances was lined up to take the wounded.

"The event is happening on the Egyptian side, and we are making our preparations," an Israeli police spokesman said shortly after the blast.

Egypt has been rocked by political turmoil and violence since the army overthrew president Mohamed Morsi of the Muslim Brotherhood in July after mass protests against his rule.

Islamist militants based in the largely lawless Sinai peninsula near Israel have stepped up attacks on security forces since Mursi's downfall, killing hundreds.

Dozens were killed and over 150 people were wounded in a 2004 terror attack in the Taba Hilton Hotel in Sinai when a car bomb exploded at the entrance to the building. Thirteen of the dead and over a 100 of the wounded were Israeli.

Yoav Zitun and Meir Ohayon contributed to this report