'Early intervention has a great impact both on the children and on the families'
Photo: Shutterstock

It’s not often that presenters at a scientific conference quote poetry. But Connie Putterman, one of the organizers of the conference and chair of the Canadian Friends of the Hebrew University, did just that, reading a poem her son, who has autism, wrote when he was 13.

Called "The Hanukkah candle that could not burn," it shows the feeling of difference that many autistic children have.

Art
A picture's worth
Shlomit Sharvit
(Video) Autistic savant Stephen Wiltshire adds Jerusalem to the list of breathtaking sketches he draws from memory. 'Jerusalem has a lot of details that don't make architectural sense. It was a challenge,' he says.
A picture's worth

"I am a beautiful Hanukkah candle but I could not burn, I could not burn,” the poem begins. "I just couldn’t get that spark right. I was trouble, every Hanukkah night… but they didn’t give up hope, so they tried, night after night, match after match, fire after fire, until I burnt."

The poem also showed one of the themes of the symposium – the importance of early intervention.

"The diagnosis should happen as quickly as possible because we do know that early intervention has a great impact both on the children themselves and also on the families," Professor Cory Shulman of Hebrew University in the early childhood graduate program, told The Media Line. "As a result of that, we hope that we can get to children as young as two years old. Here in Israel we’re really doing that much better than in other places."

At the same time, she said, it is not always easy to make a diagnosis of autism.

"Autism is a difficult one. There’s overlap with a lot of other disabilities and it is not easy to make a definitive diagnosis. The second part of the research I’m presenting here is taking a group of children from 15 to 30 months, when they first came in for a diagnosis and following them until first grade to see what their developmental trajectories are, what can predict a better outcome and what kinds of services they’ve been able to access," she said.

In most Western countries, the percentage of children diagnosed with autism is about 1%. The spectrum runs from those with severe autism, to those with Asperger syndrome, who are often highly intelligent but have trouble deciphering social cues.

The participants were riveted by Lihi Lapid, an Israeli novelist and wife of Israel’s Finance Minister Yair Lapid, who has written an autobiographical novel on her experience as a mother of an autistic daughter, who at age 17 still does not speak. 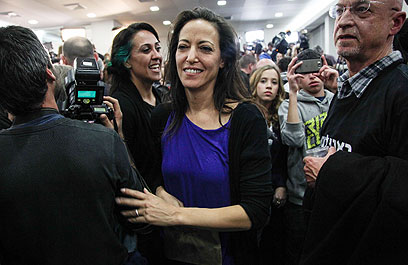 Lihi Lapid. 'My daughter made me the person I am' (Photo: Avishag Shaar-Yashuv)

"Part of being a mother for an autistic kid is feeling guilty all the time for what you didn’t do," Lapid told the crowd after detailing all of the kinds of therapies including horseback riding therapy that her daughter received.

Being a parent of a child with autism can be all-consuming.

While services in Israel are given on the national level, Canada functions more province by province.

"We share a lot of interests and sensibility," Lonny Zweigenbaum, professor of pediatrics, University of Alberta told The Media Line. "There’s a real focus on individuals with autism and trying to improve diagnosis and treatment. That’s very much the focus of this conference. We are sharing our success and trying to understand the differences in the service system and how we bring it into practice."

Israel’s newly appointed Chief Scientist Nurit Yirmiya of the Ministry of Science, Technology and Space is also a professor of psychology at Hebrew University. She has been working in the field of autism for the past 30 years.

"I hope that we will be able to bring this level of cooperation into a government to government agreement and that autism will be part of the agreement with Canada," she said to applause.

Her research deals with questions of "resolution," of how parents learn to cope with a diagnosis of autism. Her study found that even years after diagnosis, between one-third and half of all mothers still had unresolved issues surrounding the diagnosis.

Reprinted with permission from TheMedia Line