'When it comes to health, people are people no matter what they believe in'
Photo: Index Open

Jerusalem: Land of medicine or miracles?

The blue and white painted ceramic jars stretch up to the ceiling. Marked with the traditional symbol of five crosses, each jar held a medicine ranging from honey to myrrh to the famous Jerusalem balsam. The jars came from the first pharmacy in Jerusalem founded by a Franciscan month in the 17th century.

"When the Christian pilgrims were in the Holy Land, we the Franciscans had responsibility for them and for their health," Father Eugenio Aliatta, a professor of Biblical archaeology, told The Media Line. "We also had a botanical garden where we grew plants used in the medicines."

Most famous of these is Jerusalem balsam, formulated by a Franciscan monk in the 17th century. Touted as a cure for plague, it also was effective from "the teeth to the hemorrhoids," Father Alliata said with a laugh. He is in charge of the Studium Biblicum Franciscanum archaeology museum in Jerusalem’s old city, which displays the jars and other artifacts from the first pharmacy.

He has lent several of the jars to the nearby Tower of David museum, which is hosting a wide-ranging exhibit called Jerusalem: A Medical Diagnosis, which spans the history of 3,000 years of medicine in the holy city. 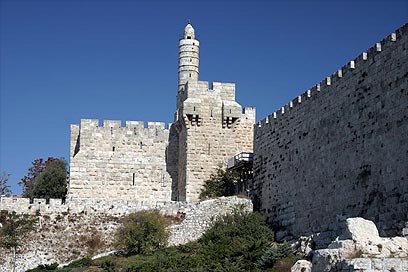 It is sometimes difficult to distinguish between medicine and miracles here.

"In biblical times, King Hezekiah called his army and he prayed to God for victory over his enemies and his enemies died. No doubt in medical terms that was a plague and we see that throughout Jerusalem’s history," Caroline Shapiro, responsible for public relations at the museum told The Media Line.

"There are different plagues. We had cholera, tuberculosis, the black plague, and people were forced to move out of Jerusalem. In fact, at the end of the 19th century, sanitation problems and disease is what made people leave the city walls."

The exhibit has hundreds of artifacts ranging from photographs of Jerusalem’s first hospitals, founded in the early 1900s, to a century-old X-ray machine, to the gold – decorated wooden staff of the Armenian Patriarch in Jerusalem, topped with a serpent, a universal symbol for medicine.

"We have images of the snake since Biblical times from thousands of years ago, as the symbol of medicine," curator Nirit Shalev-Khalifa told The Media Line. "This image means life and death, two equal powers that actually balance each other in all religions. The serpent makes you alive but also carries the poison."

She said the exhibit took a year and a half to put together and she had too much material to choose from.

"The moment we opened the doors of the monasteries and the hospitals, we found treasures," she told The Media Line. "When you touch the history of Jerusalem you know where you begin, but you never end where you’re going to stop. It’s a never-ending story."

Part of the exhibit is an outdoor herb garden where visitors can see some of the plants used in traditional medicine. They can not only look but can take a cutting home, if they wish.

The exhibit covers two halls of the museum, as well as the courtyard. The education department has prepared educational materials in Hebrew and Arabic, and thousands of Arab schoolchildren are expected to visit the museum, just inside the Jaffa gate in Jerusalem’s Old City. The museum offers stunning views of Jerusalem, along with the exhibits.

It also offers a glimpse into a past of coexistence among all three monotheistic religions in Jerusalem.

"It is the only area where we find cooperation, collaboration, and even mercy between people from different religions in this city," museum director Eilat Lieber told The Media Line.

"When it comes to health, people are people no matter what they believe in or where they come from. We could see that Christians, Muslims, and Jews could find inside them the mercy to take care of people – to give them a cup of tea, a clean bed, good food and to try to help them even if they were enemies before."

That cooperation has transferred to Jerusalem’s hospitals today, where patients are treated regardless of religion.