God, take me to a planet with no evil

I plead with God to release me, if only for a few hours, from this planet drowning in rivers of hate and murder. But we were born into this world to be tested, and the test, it seems, is preserving God's image even under extremely difficult conditions.

I want to emigrate from this reality

For several long hours now, my computer screen has been glaring at me with a reproachful stare, demanding of my fingers to immediately release the keypad. But I, in some sort of childish protest, imagine how I shatter it and its keyboard on the corner of my writing desk, and take up a strike against words.

Instead of writing, I dream that somewhere amongst the thousands of stars in the sky the Master of the Universe created a few more inhabitable worlds, and on a few of them, even on just one, live people who do not know the taste of hate and are not satiated by revenge and blood.
Heightened Tensions
Sane people on each side, unite!
Ali Zahalka
Op-ed: Jewish and Arab leaders must work to stop the journeys of revenge before the fire of hatred spreads and eats away at every good spot.
Sane people on each side, unite!
The single whisper of the brave and resourceful youth, "We've been kidnapped," the insensitive voices commanding, "Put your head down," and the sound of the subsequent point blank gunfire, do not leave me. These children are approximately the same age as my children and the recording does not permit me not to imagine. It is hard to sleep at night and hard to breathe during the day I cast my supplications before the Master of the Universe for him to release me, and not just for a few hours (okay, for a few days) from this planet drowning in rivers of hate and murder. From the planet where children do not always evoke compassion, from the planet where a person wants to, and succeeds at, killing his friend, and send me to a parallel universe, where God's creation does not take pleasure in hate.

There are no 'human animals'

The prime minister declared that "the three youths were kidnapped and killed in cold blood by 'human animals.'" This image is not an original concoction of his own imagination. Many choose to label cold-blooded killers that way. However, in this case he is unfortunately mistaken.

Animals (as far as we know) do not have belief systems and ideologies, and when they kill they do so for revealed, simple, and immediate reasons. Animals did not develop weapons technologies. Animals did not invent the atomic bomb, "honor killings," pits for mass murder graves, racism, genocide or gas chambers. They were all created by humans. We created all these things. The real horror that must be announced in a clear and unparalleled sad voice is that the murderers were humans, simply and only humans. Like me and like you. Humans murder humans in twisted fashions that are unfortunately easy to conceive. Real redemption will come when we will agree to understand that cruelty is a human trait, and it is planted in each of us in various ways, not just in some other "human animals" who look different and are easy to identify. The evil that naturally sprouts from us is the religious test that we must, absolutely must, acknowledge and address with honesty and courage.

God will not send me (so it seems) to the planet of justice and peace because confronting evil is our religious mission. God never signed a contract with me stating that he will supply me with pleasure and peace in return for which I will be, let's say, pleasant. 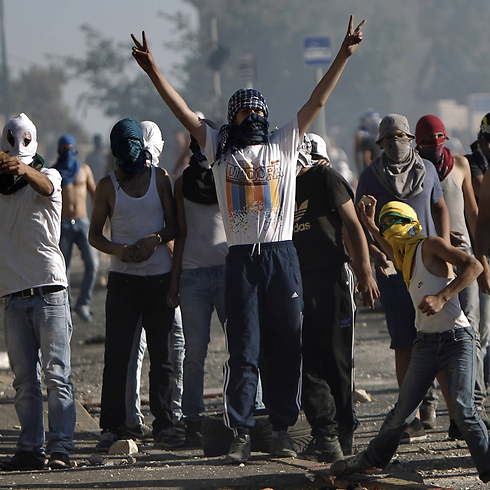 Twenty-five years of Intifada, 25 years of violent responses, 25 years of escalating violence and we are still stuck deep in Balak's trap (Photo: AFP)
I cannot articulate it better than the noble parents of Naftali Frenkel of Blessed Memory: "We do not know exactly what happened in east Jerusalem and it is being investigated by the police. However, if an Arab youth has indeed been murdered for nationalistic reasons then it would be a shocking and terrifying act. There is no distinguishing between blood and blood. Murder is murder, regardless of the victim's nationality or age. There is no justification, no forgiveness and no atonement for any murder."

I have no other planet

And God did not promise to give me a fair and compassionate human society. The responsibility for the violence and destruction are mine. Ours. Each person as an individual and we as a community. We must write, we must speak out, and we must demonstrate love and human solidarity in public squares and private homes.

We must enter the homes of our Palestinian brothers and say to them and to ourselves that we are taking responsibility for life in this violent region and we commit to ceasing our own violence and expect from each and every one of them exactly the same commitment. No "one more act of revenge and we are done," no "we will deal them a decisive blow" and no "we will retaliate as they deserve." So many children have already been murdered in this region, on every possible side of the barricade of hate. So much blood has already been spilled, and this barren land has been flooded by overflowing rivers of parental tears. This blood has been spilled by all of us, and no can claim that his hands are clean. Every act of revenge cancels the difference between the victim and the attacker. Whoever really desires to stop the violence must start with himself.

Getting out of Balak's trap

Balak and the people of Moab, central characters in the weekly Torah portion, are afraid of the children of Israel. Balak, who wants to initiate a preemptive military strike, tries to recruit the support of the prophet Balaam to curse the children of Israel, in order to weaken them and save Moab from the impending defeat.

Twice Balak sends for Balaam and he barely responds. Three times Balak attempts to force a curse on Israel out of Balaam's mouth, and three times he fails. It is fascinating to try to understand what causes a king to attempt the same solution again and again, to fail again and again, and despite this, not attempt to change strategy. Was one attempt to achieve cooperation with Balaam not enough? Was it not enough for one curse to become a blessing? It seems that only one solution was seared into Balak's mind to resolve the distress afflicting his people. Sometimes fear blocks creative thinking, and lacking the ability to think outside the box of his initial solution, Balak again attempts a solution whose failure is inevitable.

'As a dog that returns to his vomit, so is a fool that repeats his folly'

We know Balak's trap well. Weight loss institutes, for example, make good money exploiting it. A thousand times we start diets. A thousand times we fail. Each failure adds to our weight a few more pounds (at least), nevertheless for some unexplainable reason we continue to believe in a system that produces failures. If diet plans really worked, there wouldn't be so many different weight loss institutes. If wrinkle-removing creams really worked, they would not succeed at selling themselves under so many different names, prices, and packaging. Successes lead to solutions and therefore if you saw a worthy way of going about something repeatedly proposing itself for sale, it worthwhile for you to assume that it is not successful. Since I have started to trust my own mature opinion, since the outbreak of the first Intifada, we believe "if we just show them how it is, the situation can be resolved." Since Yitzchak Rabin's instruction, "We need to break their hands and legs," and until today, I have heard countless political and military leaders and opportunistic commentators who still hold fast to the belief that "just a little more force and we will be done with it." Indeed, this is the "Balak syndrome." Even someone not bothered by the ethical problem of violence should sense the practical damage that it causes. Twenty-five years of Intifada, 25 years of violent responses, 25 years of escalating violence and we are still stuck deep in Balak's trap.

With the absence of worthy leadership

With the absence of worthy leadership capable of creatively thinking about the conflict, the responsibility falls on each and every one of us to do so. I know and accept the possibility that the danger of "Balak's trap" that I pointed out can also happen with my proposed solution: On the solution whose main principle is discussion for the sake of withdrawal from the territories, dismantling settlements, establishing new borders and cessation of violent activities.

It could very well be that I am also stuck in an intellectual trap, as indeed if this solution would work, in one of the frameworks, it would already have been implemented. So apparently what is demanded of us, ordinary people, is that we begin speaking with each other so that we can escape Balak's trap, and we will demand from our leaders to implement new possible solutions. I am ready to put aside my preconceived plan and hope that others will also do the same thing, and perhaps we will find a solution that isn't from the "political left" or the "political right," and it could be a real breakthrough.

On one condition, that I can look at myself in mirror

I am willing to give up on all of my premises. Not just willing to, but I want to rethink everything from the beginning. I want to be creative and discover that wise and beautiful plan resting somewhere that has not yet been articulated.

There is one thing which I will not be willing to compromise and it is protecting the "image of God" in all people. I will not be able to accept a solution that will cause me to be ashamed of my actions when the time will come for my soul to give an accounting for before the heavenly court.

And in the beit midrash of talkbacks

Thank you "Quiet Waters" (Talkback #21) for adding an additional stage in the peace vision. Thank you for the midrash that is a poem in and of itself: "They will beat their swords into words and their spears into songs."

To Satmar Rebbe, our political opinions regarding several matters are not that far apart. For some time now, the Israeli left finds interesting and thought-provoking common political ground with the political world of the rabbis of the Babylonian Talmud and of contemporary rabbis such as you. But your recent statements?! How dare you?! Blaming these parents for the murder of their children is a mixture of stupidity and maliciousness. Indeed in exactly the same fashion it is possible to blame every Israeli for endangering his or her loved ones, or it is equally possible to blame every Jew that didn't convert to Christianity (at historical moments of religious persecution) for suicide and the murder of their family. Click here to read this article in Hebrew. Translated by Uzi Bar-Pinchas.