Eighteen Palestinians were killed and 35 wounded in an IAF strike in the Tuffah neighborhood in Gaza City that hit the house of Gaza's police chief and a mosque on Saturday night, said Dr. Ashraf al-Qidra, the Gaza health ministry spokesman. A later report said three more people were killed in Rafah, while five others were wounded.

A Hamas source said the police chief, Tayseer Al-Batsh, was in a critical condition and most of the dead were from the same family.

The army attacked a total of 109 terror targets in the Strip on Saturday: among them 59 hidden rocket launchers, 23 homes of senior Hamas and Islamic Jihad operatives, 2 military complexes and training camps, 17 sites to store and manufacture weaponry and 8 tunnels.

According to the Palestinians, the overall total of Palestinian casualties has reached 151 killed and over 1,000 wounded by the end of the fifth day of Operation Protective Edge, with most of the casualties said coming from the civilian population.

Clips of IAF strikes in Gaza

Among the houses hit were the homes of the head of Hamas' rockets unit, and the head of Islamic Jihad's rocket production.

The Beit Lahia home of the Hamas commander was used as a control and command center for the organization and several rocket launchers were hidden there.

In one of the strikes, two Hamas terrorists and two Islamic Jihad terrorists, who the army says were responsible for rocket fire at Israel, were hit in the northern Gaza Strip.

The IAF also hit a rocket launcher in Beit Lahia that fired the rockets at central Israel.

At least six people were killed in an IAF strike in the Sheikh Radwan neighborhood in Gaza City. The target was reportedly the house of the sister of former Hamas prime minister, Ismail Haniyeh, who said two of his nephews were killed in the strike, both of whom were a part of terror activity. 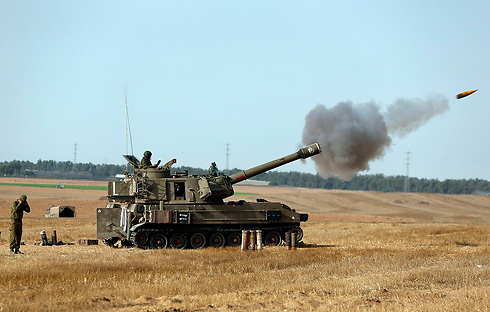 Since the beginning of Operation Protective Edge five days ago, the IDF has attacked over 1,236 targets in the Gaza Strip, among them 632 rocket launchers, 130 military basis, 106 "command and control infrastructure" and 222 tunnels.

Gaza officials said Saturday that at least 19 Palestinians were killed so far on Saturday (from midnight). The Health Ministry in Gaza said that the dead included a 17-year-old, and at least two people were also critically wounded in an IAF attack in the Jabalia refugee camp.

Three of the deaths reported by the Health Ministry were said to have been police officers in Gaza City while other targets were hit just north and west of the city.

Gaza officials said a center for the disabled was hit Saturday, killing two women. The IDF said the mosque concealed rockets like those used in the barrage of nearly 700 fired by Gaza militants at Israel over the five-day offensive, while saying it was investigating claims about the other sites hit. 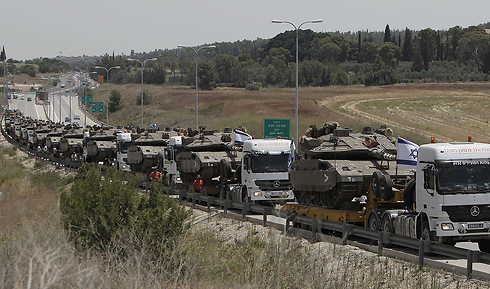 Tanks being transfered to the Gaza border (Photo: AFP)

Hamas said Israel hit a pair of mosques in its offensive. The competing claims could not be immediately reconciled, though Hamas said it hoped the mosque attack would galvanize support in the Muslim world.

"The bombing of two mosques in Gaza overnight shows how barbaric this enemy is and how much is it hostile to Islam," said Husam Badran, a Hamas spokesman in Doha, Qatar. "This terrorism gives us the right to broaden our response to deter this occupier."

The IDF released an aerial photo of the mosque it said it hit, saying Hamas hid rockets in it right next to another religious site and civilian homes. It said Hamas, Islamic Jihad and other Gaza militant groups use this tactic of abusing religious sites to conceal weapons and establish underground tunnel networks, deliberately endangering its own civilians.

"Hamas terrorists systematically exploit and choose to put Palestinians in Gaza in harm's way and continue to locate their positions among civilian areas and mosques, proving once more their disregard for human life and holy sites," said Lt. Col. Peter Lerner, an IDF spokesman.

"We have accumulated achievements as far as the price Hamas is paying and we are continuing to destroy significant targets of it and other terror organizations," Yaalon said after a meeting with top security officials. "We will continue to punish it until quiet and security returns to southern Israel and the rest of the country." 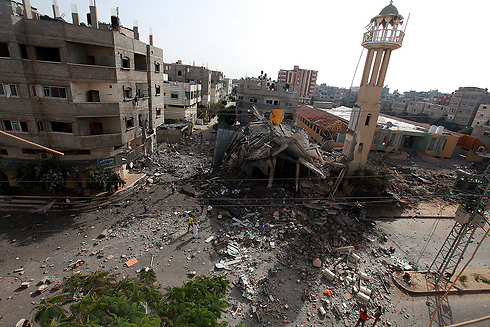 Mosque hit by IAF in Gaza (Photo: EPA)
The IDF says it has "significantly undermined Hamas' capabilities," and that the IAF also targeted 10 terrorist activists", including some involved in rocket attacks. Israel has warned that it will send in the thousands of troops amassed on the Gaza border in a ground operation if the rocket fire on its communities is not halted.

The IDF Spokesperson confirmed Saturday that the IAF had hit over 60 terrorist targets overnight, including the site from which rockets had been fired on Be'er Sheva.